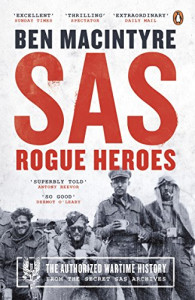 Spying is a dirty game, yet I’m fascinated by spy stories, whether fictional or the factual ones by Ben MacIntyre, all of which I’ve enjoyed. I found myself in different territory with his book about the SAS. Reading about spies, you know that their activities lead to deaths but it all happens offstage as it were; here, the deaths are all too real and make painful reading.
( Collapse )

Interesting to have the show in September instead of May because rather than massed ranks of foxgloves (which I love), we get to see late-flowering plants. That is, I’d like to see lots of late-flowering plants but you’d think this show was about anything but plants. Is anyone else bored stiff by the TV coverage of this year’s show? Since I can’t go in person, what I want is a virtual tour, not constant environmental lectures. Yesterday evening I was so fed up with it that I just switched off.

BTW mine is a country garden, not at all tidy and containing wildlife habitats and plants for pollinators. It’s not the principles of the well-meaning environmentalists I object to, just their bossy attitude. And may I remind them that *every* garden is artificial, man-made and intended to give delight.

I found this excellent little programme on Sky Arts TV yesterday evening. It dealt mainly with the period after the death of Hardy’s first wife, Emma when, overcome with grief and remorse (he had treated her badly), he wrote some of his greatest poetry. The talk was serious, more like a radio programme with pictures than the usual TV talking heads and pointless visuals. There was a commentary over the rolling credits at the end which had me wondering who the writer was. It was Virginia Woolf. All the contributors had something interesting to say and I enjoyed it very much. I just wish I could convince more people that Hardy was not just a doom-monger and also that he was one of our greatest poets.

O the opal and the sapphire of that wandering western sea,
And the woman riding high above with bright hair flapping free –
The woman whom I loved so, and who loyally loved me.

The pale mews plained below us, and the waves seemed far away
In a nether sky, engrossed in saying their ceaseless babbling say,
As we laughed light-heartedly aloft on that clear-sunned March day.

A little cloud then cloaked us, and there flew an irised rain,
And the Atlantic dyed its levels with a dull misfeatured stain,
And then the sun burst out again, and purples prinked the main.

- Still in all its chasmal beauty bulks old Beeny to the sky,
And shall she and I not go there once again now March is nigh,
And the sweet things said in that March say anew there by and by?

What if still in chasmal beauty looms that wild weird western shore,
The woman now is - elsewhere - whom the ambling pony bore,
And nor knows nor cares for Beeny, and will laugh there nevermore.

Chatting to a friend on the phone last week and having our usual rant about the state of the world, she raved about the above film, one of two. I watched the first one yesterday on
the iPlayer and she was right. This is the most lucid account I have ever read or watched about the history of Afghanistan and its wars with great powers. The next one is about the doomed Russian invasion. The films were made in 2012. One point of interest is that public opinion in the nineteenth century was against the Afghan invasion (the Duke of Wellington opposed it) but the hawks, as Stewart calls them, had their way, with disastrous results. Five stars and I want to read Kim again.

When you look at Rory Stewart’s CV, you wonder how one man can have done so much before he’s fifty. Then you try to think of a single useful thing Boris Johnson has ever achieved.

The development of cricket in Afghanistan, although recent, has been rapid and excellent. Now, Cricket Australia say they will cancel their men’s Test with Afghanistan if women are no longer allowed to play cricket there.

Liberal England is always coming up with little gems and today he reminded me how much I love this song.

Channon continues his hectic social life, when the diaries come to a halt, just as important events in his life take place. I couldn’t make out whether he stopped writing during these years or the diaries had disappeared. When we pick up the story again, he has married Lady Honor Guinness and become very rich indeed. He has made no secret of his desire to be rich or of his secret longing to be a peer. The marriage is not a success, although he says he loves Honor and worries about her. They have a child, Paul (later a minister in Margaret Thatcher’s government), whom he worships; he absolutely dotes on ‘my baby boy’. He would love lots more children but, after three years of marriage, Honor not only refuses to have another child but tells him that ‘conjugal relations’ (his words, not my euphemism), are off. This upsets him and he blames it for his renewed indulgence in what he calls ‘lechery’, i.e. gay affairs. Neither wants a divorce but all they seem to have in common is a love of buying houses (one in Belgrave Square and a country house, Kelvedon), doing them up at great expense and filling them with incredibly expensive antiques and bibelots. How he loves jewels, both for himself and his wife!
( Collapse )

It’s all happening at the Oval today, my home ground (in the past) and therefore my favourite. I see Moeen Ali, whom I think so much of, has been appointed vice-captain. England haven’t named the squad and have to make decisions about bowlers. Personally, I would drop Curran (much as I love to see his fierce little face when he bowls) and bring in reliable Woakes.

The weather is foul. I should think the floodlights will be on and the players wearing their woolly jumpers. I’m old-fashioned and like to see them in cricket sweaters and caps. Here's my cricket sweater, knitted years ago. Perhaps I should wear it, to show solidarity. It's cold enough! 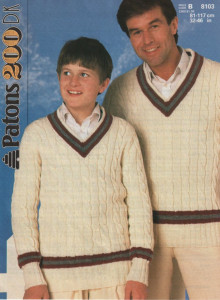 In later years, they ended all their gigs with this song. 'As if one person had two voices'. 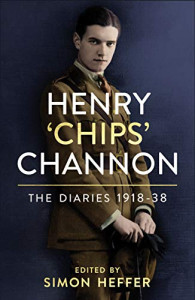 I’ve just started Simon Heffer’s mammoth work, a new edition of the diaries of ‘Chips’ Channon. A collection was published in 1967 but was heavily redacted, partly for fear of libel suits. Now, Channon’s grandchildren have given permission for a complete edition. Chips Channon is a name you often come across in biographies of his contemporaries but I knew nothing about the man except that he wrote scandalous diaries. I can see that it will take me a very long time to get through this first volume (which was 99p for the Kindle a few days ago) and that I’ll be reading quite a few other books at the same time.
( Collapse )
Collapse