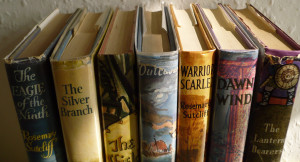 Most people must know by now that Rosemary Sutcliff’s classic novel The Eagle of the Ninth has been filmed as The Eagle. There’s a review here from The Guardian. With everyone talking about the book I decided to read it again.

I was probably about eleven when I first read it and Sutcliff became one of my favourite authors. It wasn’t just that the stories were interesting, but the connections between the books (a ring, a battered eagle, a flint) gave a real sense of history. I can truly say it’s thanks to Rosemary Sutcliff that I chose a history degree. The Eagle of the Ninth starts with young Marcus taking his first command, at the edge of the Roman Empire in misty Britain. His career with the Eagles is destroyed by wounds received in a battle against insurgents. At this stage the reader’s sympathies are all with Marcus and the Romans, which is clever. Marcus is more than a simple soldier though; he becomes interested in Britain and the ways of the native peoples. When he buys the slave Esca he puts to him the classic defence of colonialism, saying that surely the laws, roads and other advantages of the Roman way are beneficial to the subject peoples? Esca replies that they are not and cannot be their ways. The story becomes an exciting treasure hunt as Marcus and Esca seek the lost eagle of the Ninth Legion and I finished it almost at a sitting. At the end I decided I’m definitely Roman in spirit.

As you read your way through the other Roman novels you see the assimilation of Roman ways (in the south, at least) until Roman ways have become the old ways, to be defended against new invaders. It’s all very subtle and brilliant. If there is a weakness in the novels, for me it’s the dialogue. I get tired of ‘It is in my heart that’, ‘It is in my mind that’ but I’m just quibbling, as it’s very difficult to write so that characters from the past sound slightly different from us but not ridiculous. The Eagle of the Ninth was illustrated by C Walter Hodges. Much as I like his work, Charles Keeping was far the better choice for the other books; his stark, stylized pictures seem a perfect match for the stories.

The film is getting good reviews but looking at the trailer

I personally find it hard to get past the American accents and I've spotted one huge error. Looks exciting, though!

I’m moving straight on to The Silver Branch now and I see I’m in for a big Sutcliff re-read in addition to the books I already have on the go. My absolute favourite of all her books is not a Roman one at all but Simon, in which childhood friends find themselves on opposite sides in the English Civil War. It’s rare for both points of view to be shown in a work of historical fiction for children (see The Children of the New Forest, for example) and shows Sutcliff’s skill at writing fiction which was never didactic, or a mere excuse to teach history (a weakness in Cynthia Harnett’s novels, IMO). Challenging, perhaps, but so worth the effort.

These books are as suitable for adults as for good readers of eleven-plus, I’d say. The Book People have a good offer of the so-called Eagle Trilogy for £4.99. Cheaper than £200.00 or more for a first edition of TEOTN!
Collapse