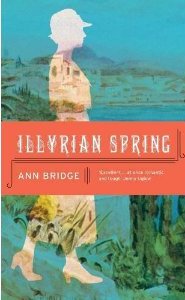 It took me a long time to read this book, which reflects the leisurely pace of the narrative. Lady Kilmichael, feeling undervalued by her brilliant husband and her grown up children, runs away, telling no one where she’s gone, in order to be alone and paint. It turns out that she is already an artist, well known by her pseudonym. This is just one of many surprising things we find out about her. By virtue of her age and status, she is a woman of the world, who happens also to be rather lovely to look at and always well dressed. Yet she suffers terribly from what we now call low self esteem, feeling that she has failed with her adored daughter, Linnet. Although she proves equal to any situation, there remains something girlish about her.

In Dalmatia she meets by accident a young Englishman, Nicholas, an artist manqué whose father insists that he must be an architect. He is angry, sulky, and, with health problems as well, rather a prickly youth. In spite of this, an unlikely friendship develops between the two exiles, made more complicated when Nicholas inconveniently falls in love with Lady K, who is old enough to be his mother. At first she is blind to this (her emotional immaturity again) and then tries to get round it by constantly calling him ‘my dear child’.

The whole book is about the working out of this relationship; thoughts, emotions and conversations are more important than events. It succeeds because of Ann Bridge’s wonderful eye for detail in her descriptions of the landscape, architecture and flora of the region, plus its colourful characters.
The low sun, striking level through the branches, lit up the silver undersides of the small fine leaves, so that the olive groves were filled with a sort of delicate illumination. Down in the fields a low growth of bay and myrtles bordered every path, as brambles border field paths in England; up here there were still myrtles, and great clumps of Phlomis fruticosa , a plant with bright yellow flowers and felt-like silver foliage, which brushed her skirts as she passed. What a countryside, she thought, which has bay and myrtle for brambles and phlomis for nettles, and pomegranates and arbutus for hazels and hawthorns!
That just happens to be one passage I marked while reading; there are more and better descriptions of the wonderful flowers to be seen everywhere. The feeling of heat and light floods the book, so that reading it is almost like taking a holiday yourself. No wonder Illyrian Spring apparently started a fashion for travel to Dalmatia. You have to think how very agreeable it was to be a rich Englishwoman abroad before the war.

Comparison with Elizabeth von Arnim’s The Enchanted April is inevitable: the unhappy Englishwoman, the redemptive qualities of escape, a sense of freedom in a lovely landscape and a resolution. I think myself that von Arnim’s story (written earlier) has more charm and humour, but Ann Bridge’s book perhaps has more depth to it. I have a small collection of the author’s works, yet had never come across this, one of her most popular. The new paperback from Daunt Books is handsomely produced and bodes well for their future publications.
Collapse