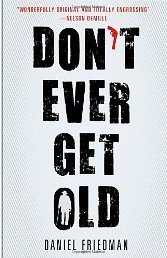 Another proof received from NetGalley. This is probably not a book I’d have picked off the library shelf, so I’m glad I took this chance to read it. Buck Schatz. Ex-army; ex-homicide department, where he was a legend; inveterate smoker (Lucky Strikes). Now he lives with his feisty wife Rose, paying occasional visits to the Jewish Community Centre. One day he gets a deathbed request from an old comrade to track down a war criminal. Sound familiar? The difference between this and so many other detective stories on a similar theme is that Buck is eighty seven years old and has been retired for thirty five years. This makes the book both a murder mystery and a barbed look at what it’s like to grow really old in modern Memphis. Buck’s mind is still sharp (most of the time) but an increasingly frail body is likely to let him down at any moment, ‘so my world had become a gradually shrinking circle, with the house in the middle of it.’

You can’t keep an old cop off a case and for Buck it’s personal, because as a POW he knew this particular Nazi only too well and has the scars to prove it. He wants to trace the man and the stolen gold he’s said to have got away with but is out of touch with modern methods. He can manage a mobile phone but not a computer and has no idea what Google is. His grandson can help out but the two don’t always get along and wherever they poke their noses, a grisly murder seems to take place. Buck relies on his cop’s instinct but worries it may be letting him down, because ‘My doctor had warned me to report any paranoid feelings; they were an early sign of dementia among the elderly.’ He has no respect for modern fads and political correctness. ‘Her face kind of pursed up a little. “Do you mind not smoking in my car?” I minded, but I let it slide.’ He lights up anywhere and challenges anyone to stop him. Buck is a curmudgeonly old so-and-so, with few friends, but you can’t help cheering him on as he pursues his goal in his old Buick. After all, ‘Death was close, and it smelled like hospital. Like nursing home. No point in buttressing the walls. No point in barricading the door. It was coming in anyway.’ So why not one last hurrah? Luckily, Buck sticks to the advice once given him by Eisenhower: ‘Soldier, when you have nothing else to hang on to, you hang on to your gun.’

I enjoyed the chase, thought the denouement unbelievable (but this is detective fiction) and found the whole book a sardonic look at modern life as seen from the point of view of a senior. How glad I am we don’t use that term in the UK! It would make me feel older than ever. Don’t Ever Get Old is a short book and a very sharp one.