The Women of Pulp on AbeBooks 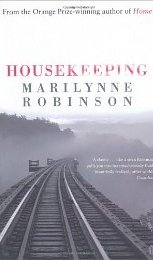 I’m not keen on books where I have to read a sentence twice in order to get its meaning, so I was off to a bad start with Housekeeping. The opacity of the style was irritating and I kept thinking, grumpily, ‘There’s too much writing in this book!’ In spite of this, I did nothing at all one evening except read it and was astonished when I saw what the time was, so it must have something.

The lost girls, as I’ve termed them, are Ruthie and Lucille. Their mother abandons them to the care of their grandmother. She dies and two great aunts move in to take over the housekeeping. They find it too much for them and Aunt Sylvie, the drifter, the transient, turns up. That’s where the bad housekeeping begins. The small family lives in an old homestead in Fingerbone, which sounds an utterly ghastly place, the kind of place you’d want to escape from to New York or San Francisco. ‘Fingerbone was never an impressive town. It was chastened by an outsized landscape and extravagant weather, and chastened again by an awareness that the whole of human history had occurred elsewhere.’ Not that nothing happens there. ‘The people of Fingerbone and its environs were very much given to murder. And it seemed that for every pitiable crime, there was an appalling accident.’

The girls grow up almost feral; truanting, wandering in the woods, staying out all night. Sylvie keeps a fire going and feeds them, while filling the house with emptied cans and old newspapers . For her, hoarding disorder seems to displace housekeeping. Lucille eventually rebels and opts for respectability. Ruthie dreamily becomes more and more like her strange aunt until people notice and take action. ‘Sylvie and I (I think that night we were almost a single person) could not leave that house, which was stashed like a brain, a reliquary, like a brain, its relics to be pawed and sorted and parceled out among the needy and the parsimonious of Fingerbone. … For we had to leave. I could not stay, and Sylvie would not stay without me. Now truly we were cast out to wander, and there was an end to housekeeping.’ So they disappear.

I suppose this is a sad book and it certainly made me angry in places, to see rootless people dropping out of life. On the other hand, Sylvie tells Ruthie that drifting isn’t so bad and maybe that’s also true, for people who choose it. Not that Ruthie has much choice in life. Then again, maybe Grandmother had three daughters and one granddaughter, each of whom turned out in different ways to be completely bonkers. I must grudgingly admit that it’s a good book but I don’t like it. What other verdict would you expect from a person who thinks aspiring writers should study George Orwell as a model of clear prose style?
Collapse