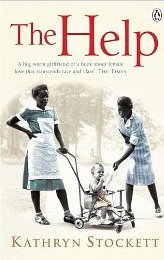 I’m late to the party with this book, nor have I seen the film. Some snobbish instinct always puts me off bestsellers, but this one came from the market for 20p, recommended by the seller, so I gave it a go. It’s very long indeed and half way through I stuck completely and read a couple of other books before going back to it.

The events in the book take place in Jackson, Mississippi from 1962. The main white characters are poisonous Hilly, who sets the tone for the town’s white ladies by sheer force of personality, and Skeeter, an aspiring writer. Skeeter has the idea of writing the stories of the coloured maids, told from their own point of view, good and bad. This is where the maids, especially Aibileen and Minny, come into their own. They get all the best lines. The whole venture is extremely dangerous, risking social exclusion for Skeeter and dismissal or worse for the maids who dare speak to her.

As with so many books set within living memory (certainly mine), I got irritated by all the date pointers: the Pill, Valium (help for women), ‘smoking’s not going to kill me’ and so on. At one point Skeeter hears The Times They are a-Changin on the car radio and ‘I feel like I’ve just heard something from the future.’ This didn’t ring true for me, nor do I think people used the word ‘typo’ in the sixties. It’s hard for an English person to understand the mindset of the old south, both before and after the civil rights movement. People who feel strongly about the Confederacy (and they do), seem bizarrely stuck in the past, like the Irish who still go on about Oliver Cromwell and William III, or Scottish Jacobites. We’re probably all ‘damn’ Yankees’ at heart, yet we’ll sing along heartily to The Night They Drove Old Dixie Down. Why is it that lost causes have all the best songs?

Kathryn Stockett writes about what she knows. She was herself brought up in Mississippi by a black maid whom she loved. Like Skeeter, she went to New York when she was twenty four. Again like Skeeter, she wonders if she’s done the right thing in telling these stories. ‘Mississippi is like my mother. I am allowed to complain about her all I want, but God help the person who raises an ill word about her around me, unless she is their mother too.’ If you’re looking for a great novel about civil rights, look elsewhere. If, however, you want to sit down and have someone tell you fascinating stories, this book is for you. 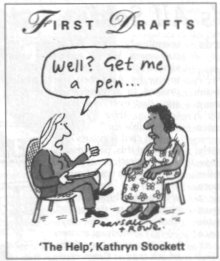