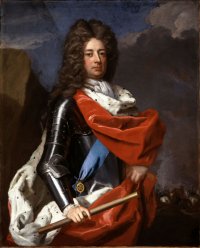 Yesterday evening I watched the first episode of The Churchills,
David Starkey’s new series about Winston Churchill and his illustrious ancestor John Churchill, 1st Duke of Marlborough. Dr Starkey has a thesis and sets out the argument in his usual forthright way. The gist is that spending ten years writing his biography of John Churchill turned Winston (as Starkey calls him in a rather familiar, Thatcher-y way), into a great war leader. The subject would make an interesting lecture, or perhaps an essay to be included in a published collection. This being television, it’s spread over three hour-long episodes. It got off to a good start, grabbing the viewer’s attention with a voice over quotation which seemed to be about the Second World War but was in fact about The War of the Spanish Succession. My problem was with the visuals, not the script.

Dr Starkey is probably right to say that the earlier conflict is ‘largely forgotten.’ The eighteenth century is an unpopular study area these days and a history student could probably get through school and university and remain ignorant of the battles of Blenheim, Ramillies and Malplaquet. So it’s sensible to begin at Blenheim Palace and explain just why it was built. We saw Starkey inside Blenheim (bizarrely decked out for Christmas at the time of filming); Starkey outside Blenheim, wearing a rather fetching green overcoat; Starkey talking to camera. Hang on, isn’t it rather boring for the viewer just to see a talking head? Liven it up. Oh help, the livening up. The lecture was constantly intercut with either archive film of Nazi Germany or clips from terrible old films. Do you know Ballet Shoes? Remember the film about Charles II in which Pauline played his sister? That sort of thing. Louis XIV persecutes Protestants: cue film of Jewish refugees disembarking, just as the Huguenots had arrived in England centuries before. Mention Charles II or James II: show old black and white movie. Some viewers may have been confused.

Dr Starkey is aiming to show that studying the early eighteenth century campaigns gave Winston Churchill a better understanding of Europe in the 1930s. Seeing Louis XIV’s ambition of achieving hegemony in Europe helped him to suspect Hitler’s aims before other people did. Eventually England faced the same choice as in the days of John Churchill: stand aside and let the tyrant take over Europe, or intervene and put a stop to him. The programme dealing with that aspect should be interesting. Not that I was at all bored by yesterday’s episode, just irritated by the constant use of rather pointless illustration and the spinning out of what I would have preferred to be a concisely told story. David Starkey is right, in my opinion, to admire Churchill, but I found his claims for Churchill the historian unconvincing. Nothing would induce me to read Churchill’s massive biography of Marlborough; ‘word pictures’ and endless description do not make the kind of history I like to read. Argument-based history and analysis is what I like and you rarely see it on TV; so in spite of the annoyances, I’ll be watching again next week.
Collapse