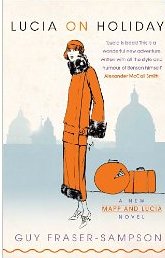 I haven’t read Major Benjy, Guy Fraser-Sampson’s previous foray into Benson-land, but as Lucia on Holiday is currently available for the Kindle at 99p, I couldn’t resist. I read it quickly and did enjoy it, but with reservations.

Lucia decides to spend some of her money on a splendid holiday for herself and Georgie in Italy. At the same time, Major Benjy is asked to accompany the son of a maharajah to Italy and his wife, Mrs Mapp-Flint, schemes for them to go to the very place where Lucia is staying. The Wyses also turn up and Olga has plotted with Georgie that she will be there, too. Everything is set for the games to begin; wargames, that is, for nothing will stop Mapp and Lucia trying to get the better of each other. A losing battle for poor Mapp, who never learns.

This is all quite entertaining, but there is far too much reference to incidents in earlier books which I’m sure anyone who’s chosen to read this one will be familiar with already. That sort of cut and paste is cheating, I think. Then, I have a rule about sitcoms: I don’t like the characters to move outside the location which keeps them all together. The same applies here. Many Tilling characters are necessarily missing and the broader ambitions of Mapp and Lucia in Italy are actually less riveting than those meetings over the shopping baskets in Tilling which lead to cries of, ‘No!’. At one point I got really worried about the direction Georgie’s relationship with his beautiful Italian valet seemed to be heading, hoping Mr Fraser-Sampson wasn’t going to take a character to a place he certainly shouldn’t go. There’s a lot of misunderstanding, the fallings-out are more serious than before and at the end there’s a Georgie/Lucia situation left unresolved. I do like a book to have a proper ending. Tarsome!

As I said, I did enjoy meeting the immortal characters again, but I think Tom Holt’s continuations (Lucia in Wartime and Lucia Triumphant) are truer to the Benson originals and more convincing.