I’ve just been reading Joy and Josephine by Monica Dickens. In the book, she emphasises just how irritating one character is by having her refer to her crochet work as ‘crosher’. I don’t share this snobbery about people who call crochet, crosher and here’s why.

I learned to knit when I was about six and never forgot how to do it. In the seventies when crochet was suddenly fashionable, I decided to teach myself, with this very book which cost 20p. 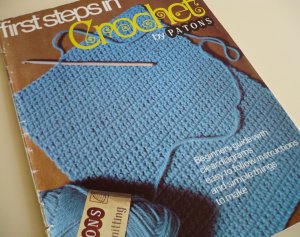 Oh dear, I didn’t get on very well and so, on top of all the million other things I did at the time, I enrolled in an evening class. Our teacher was lovely. She did exquisite work herself but was endlessly patient with our clumsy efforts. And she always said, ‘crosher’.

As a result, I embarked on a crochet storm of shawls, multi-coloured cushion covers and a tea cosy. The shawls were either presents or were later given away (fool!), the cushions ended up lining cat baskets until they were just fur pads and fit for nothing. All I’ve got left is the ancient (vintage!) tea cosy.

Now I look at it and ask, How you did that? There’s a new crochet part work out. As the first issue is only 99p and includes pattern book, DVD, yarn and hook I thought I’d give it a go. So yesterday evening, a warlike evening of The Wartime Farm followed by The Bletchley Circle, I tried making a square. First it was a semi-circle. The next attempt was wedge shaped. Then the yarn got knotted. I gave up. I can do all the stitches, I just can’t make them into anything! I think it will be back to the old Patons book, which gives much clearer instructions than this new magazine. Also, the yarns and hook supplied are cheap and nasty, which you’d expect, really. Luckily, I already have every size of crochet needle there is and a fair amount of yarn. All I need is to recover my long lost skillz. 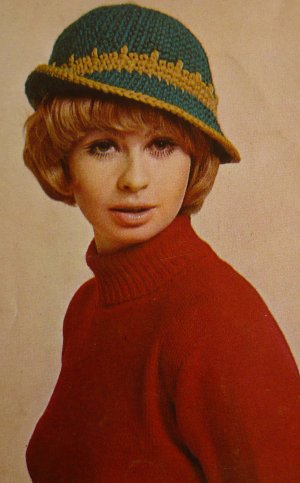 I won't make this, though. Ha ha!
Collapse