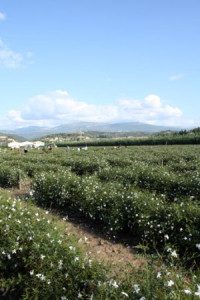 The other day, looking for a completely different book, I found two by Elizabeth von Arnim, which I’ve had for years but never got round to reading. They are Father (1931) and The Jasmine Farm (1934), both in the original Macmillan green cloth editions. In another book I’m reading at the moment, a character who is trying to write an account of his real life adventures marvels that some people are able to write ‘pages and pages about nothing’. Elizabeth von Arnim had this ability all right, and the proof is in these two novels.

Like Princess Priscilla, Father is a book about trying to escape. Written in a curiously light style for the subject matter, it deals with quite serious issues of freedom versus duty and whether achieving the first can justify neglecting the latter. Jennifer, the main character, lives alone with her widowed father, typing his manuscripts (for he is a distinguished writer) and running the household. When Father, astonishingly, appears one day with a new wife who is much younger than his daughter, Jennifer’s reaction is relief. At last she is free! So she rents a country cottage where she meets James, a young clergyman who lives in thrall to his much older sister. Jennifer has run away. Now James’s sister Alice makes him run away abroad because she fears he will marry Jen. Then, horrors, the new little wife runs away! Where is poor Jen’s duty now? To add to the orgy of escape, James tries to run away from his sister, to return home to Jen, but she forestalls him. This all takes place in the form of internal monologues, sometimes amusing, sometimes a leetle long and tedious, and one has a strong desire to bang all the characters’ heads together until they sort themselves out into couples. The ending is rather inconclusive, making it an odd book altogether. There are touches of the von Arnim charm, as when she writes of Alice, ‘For her the hedges in May foamed with white sweetness, and the buttercups turned the fields to glory, in vain. … While as for when the daffodils trooped out in March and took possession of the world, she saw in this recurring miracle merely a sign that lamb would be in season and hastened to order it, roast, for their Sunday dinner.’
( Collapse )
Collapse