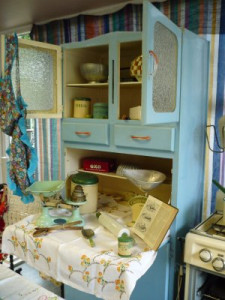 Our library currently has a small display representing an olde tyme kitchen. It caught my eye at once because when I was a child we had a kitchen cabinet very similar to this one; ours was pale yellow. They were very useful. You have two cupboards at the top with glazed doors. In the middle, a flap lifts down like a desk top to make a work surface. ISTR ours had an enamel inlay so that you could roll out pastry on it. More storage at the back. Underneath, two drawers and two more cupboards. When I asked permission to take photos, I was told that there’s a bigger exhibition at our local artsy centre, so I must find time to get down there. People love all this stuff now, and seek it out. When I told the librarian that ‘we used to have one’, she replied, ‘so many people have said that!’
I’m expecting some glad cries of recognition.
( Collapse )
Collapse