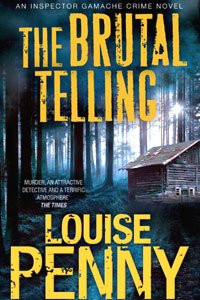 The woods are lovely, dark, and deep, according to Robert Frost in one of my favourite poems. Louise Penny’s woods aren’t lovely at all; they’re more like something out of the X-Files, brr. I think it was Geranium Cat who suggested I might like Louise Penny and she was bang right. I spotted The Brutal Telling at the library and once I started reading, could hardly put it down.

It’s my introduction to Chief Inspector Gamache (I keep wanting to call him Ganache) of the homicide department of the Sûreté du Québec; intelligent, human and admired by all. He’s called in to investigate a murder in a village an hour’s drive from Montreal. Three Pines is a small community yet it boasts a first class bistro, a bakery, a general store and a second hand book shop. So civilised! But one morning the body of a murdered man is found on the floor of the bistro and no one knows who he is. That’s not strictly true: one person does know and he’s too scared to tell. Everyone in the village must be a suspect. Is the murderer the person who found the body? The person later revealed to have moved the body? The other person who moved the body yet again?

The answer is in the forest, and wood of various kinds is a running theme. A wooden cabin, antique furniture, wooden carvings, totem poles, the red cedars of the Queen Charlotte Islands. When Gamache and his team are eventually led to a cabin in the woods they find it packed with antique treasures, which just adds to the mystery. Why on earth would someone live alone there, surrounded by priceless objects? And who would want to kill him, and why? It’s a psychological mystery, solved by Gamache’s relentless questioning, as well as by the usual routine police work. There’s not much of the thriller about this book but its depiction of life on the Canadian/Vermont border, the scenery and the somewhat strange yet likeable inhabitants of Three Pines make it a very enjoyable read.
Collapse