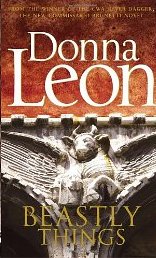 It’s a coincidence that two of these books involve unpleasant goings-on at an abbatoir. Beastly Things opens with the discovery of a man’s body in a canal. He’s been stabbed, not drowned and Brunetti traces him through his uncommon medical condition. Inspector Brunetti spends his life despairing of the corruption rife in Venice; here he uncovers massive collusion in crimes against public health. This is not really a cosy murder, as the more you know about the dead man, the nicer he seems. As usual, I enjoyed the descriptions of Venice and marvelled at the amount people eat and drink. Brunetti has a couple of pastries with his coffee every morning and still manages the three course meals his wife produces twice a day, on top of her work as a university lecturer. This book left me feeling short changed. When I saw the font size, I thought at first that I’d picked up a large print copy by mistake but no, it’s just the publisher’s way of making a short book look longer. A rather half-hearted effort by Donna Leon; perhaps she’s tiring of Brunetti.

In Blotto, Twinks and the Bootlegger’s Moll, the slaughterhouse is put to an even more sinister purpose (think Sweeney Todd). The body count in this book is very high indeed but you’re not expected to care about the victims. For those who haven’t met them before (see also here), Blotto and Twinks are the younger children of a duke. Both are stunningly beautiful but Blotto is extremely thick (except when hunting or playing cricket), while his sister is 'a Grade A brainbox'. The plot (hah!) is that poor old Blotto is ordered by his unloving mother to marry an American heiress, in order to replace the failed plumbing at Tawcester Towers. The pair arrive in Chicago at the time of Prohibition and find that the future father-in-law, a meat processing magnate, is a crook hand in glove with the mob. The prospective bride is a sweet girl but Blotto can’t face life in a country where the chief sport is rounders :-) How can he escape his fate (and avoid being murdered)? As ever, courage, ingenuity and deft use of a cricket bat see the siblings through. These books (this is the fourth) are silly but very entertaining. You have to be impressed by Simon Brett’s unflagging ability to coin new soubriquets and similes in Wodehousian style.

The Mapping of Love & Death came from my-man-at-the-market who looks out books for me. (He also found me two old school stories *in a charity shop*! This almost never happens these days.) I haven’t been able to read the Maisie Dobbs books in order but it’s usually possible to infer what’s been missed. Yet again, Maisie’s investigations take her back to the time of the War. A young American cartographer, who volunteered with the British army, was posted missing in 1916. In 1932 his remains are found and it seems that he was murdered rather than killed in action. Maisie agrees to act for his parents to find the murderer. She has access to Michael Clifton’s journals and to letters he received from ‘the English nurse’; she needs to trace the letter writer and people who served with him. The violent crimes which follow suggest that someone still hopes to benefit from the original death. Maisie solves the puzzle with her usual combination of intellect and intuition, while coping with fresh developments in her private life. She worries about her assistant Billy (my favourite) and his family; two men seem to be in love with her; her adored mentor Maurice is very ill.

I do enjoy these mysteries but find the flow of my reading is often interrupted by the language. Fires are always ignited rather than lit; people have hot beverages rather than hot drinks. As for the stilted way Maisie speaks, it’s hard to see how her admirers could stand more than an hour of her company. 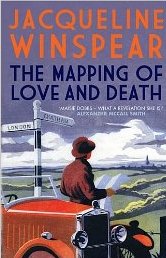