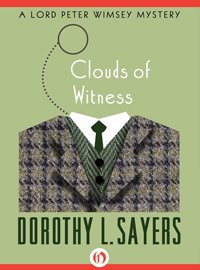 Open Road Integrated Media are publishing the Lord Peter Wimsey novels of Dorothy L Sayers as e-books. I was delighted to be offered Clouds of Witness by NetGalley. It’s the second Wimsey book, first published in 1926. Since not everyone has been reading DLS for years, here’s a brief introduction.

Lord Peter Wimsey, that ‘young sprig of the nobility’ is the younger son of the late Duke of Denver. The current Duke is his brother Gerald and they have a sister, Lady Mary. The dowager duchess is happily very much alive. Peter is five foot nine, slightly built but very strong. He has fair hair, a ‘long nose’ and is usually immaculately dressed. “He (Peter) was a respectable scholar in five or six languages, a musician of some skill and more understanding, something of an expert in toxicology, a collector of rare editions, an entertaining man-about-town, and a common sensationalist.” He lives at 110 Piccadilly with his manservant, Bunter, who helped him overcome ‘nerves’ after the first world war and is his dearest friend, although neither of them would put it like that, being sticklers for protocol. Here’s a description of the flat: “A leaping wood fire was merrily reflected in the spotless surface of the black baby grand; the mellow calf bindings of Lord Peter’s rare editions glowed softly against the black and primrose walls; the vases were filled with tawny chrysanthemums; the latest editions of all the papers were on the table—as though the owner had never been absent.” Wouldn’t you like to move right in?
( Collapse )
Collapse