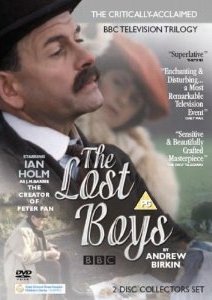 Yesterday evening, wanting something to watch while knitting (yes, I can knit again, hurrah!) I trawled through the DVDs and picked The Lost Boys. It’s a BBC drama series which I was shocked to see was aired in 1978, before some of my readers were born. The three episodes were based on the book J M Barrie and the Lost Boys by Andrew Birkin. I read the book at the time, though whether before or after the TV series, I can’t remember. I did however remember the film very well indeed, which is a tribute to its excellence.

When this dramatisation starts, Barrie is already a famous writer, subject to depression and in a sad, sexless marriage. In Kensington Gardens he makes friends with young George Llewellyn Davies, gets to know his mother, Sylvia, and in no time at all is on intimate terms with the whole family. We hear his thoughts as he jots down notes for stories while playing with the boys and devising adventures for them. One story is The Little White Bird, which contains the first mention of Peter Pan. I read it years ago and found it toe-curlingly embarrassing. The best known work to come out of Barrie’s relationship with the family was of course the play Peter Pan, one of the greatest stage successes of all time. In it he made the children his own forever, as he seems to have wanted to do in real life, to make them ‘his boys’. It’s been said that Barrie seemed doomed, that anyone he loved, died. It sounds far fetched but look at what happened to the Llewellyn Davies family.
( Collapse )
Collapse