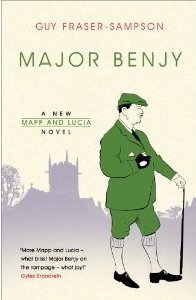 Guy Fraser-Sampson’s Major Benjy was a great success on its publication in 2008; so much so that second-hand copies were soon in demand. Now the book has been revised, repackaged and reissued by Elliott and Thompson, who kindly sent me a copy to read.

Major Benjy is not a continuation of E F Benson’s wonderful Tilling books, but a retrospective filler, the events taking place before Lucia’s arrival changed the balance of power. The author has taken no liberties with the original characters; rather he has exaggerated their foibles. The eponymous major’s drinking is more in evidence, Miss Mapp’s plotting even more devious, Mr Wyse more looked up to as an arbiter of good behaviour. The book opens with a delightful description of another day in Tilling.

Had one been standing on the top of the church tower one spring morning, one would have seen the blackness of the night sky beginning to acquire a distinctly purplish tinge over the Kentish marshes to the east, which could perhaps have been conveyed by some rather daring sponging with cobalt violet, before turning rapidly into pinkish-grey mistiness, which would in all conscience have required talent of Turneresque proportions to portray, talents beyond even those of candidates considered by the Tilling hanging committee. However, even while their hesitant hands had been reaching for the permanent magenta, the pure pale sunlight for which Tilling is justly famous would have rapidly spread across the landscape below like a giant rug being unfurled, and the town would have acquired the appearance by which it was instantly recognisable from any number of paintings. Apart, that is, from those of Irene Coles …

The peace is shattered when the air is rent by a cry of anguish from the major’s house, drawing the attention of Miss Mapp. Major Benjamin Flint’s servant has given notice, putting him in a filthier temper than usual. On Miss Mapp’s advice he advertises in Brighton for a new cook/cleaner and Mrs Heather Gillespie arrives, with unforeseen consequences. In no time she has been promoted to housekeeper and seems on far more familiar terms with Benjy than would be usual between master and servant. Miss Mapp of course observes all with a gimlet eye and the major becomes torn between the delightful Heather and his old friend ‘Miss Elizabeth’, as he calls Mapp.

While battle rages for the major’s affections, life in Tilling proceeds as normal, with bitterly fought games of bridge and endless gossip over shopping and the tea tables. Previously passive characters come to the fore, principally Quaint Irene’s even quainter maid, Lucy, who gets a speaking part and a big rôle in the plot. Will the insinuating Heather become a Tillingite? Why does Irene end the book with a broken heart? All too thrilling and, for me, nothing more fascinating than The Affair of Miss Mapp and the Chocolate Cake. I hope this whets your appetite for the book because it is a wittily written addition to the chronicles of Tilling.

The new edition will be published on 14th March.
Collapse