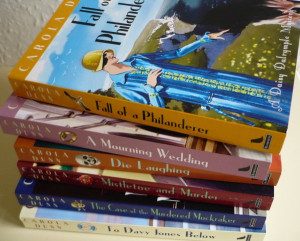 Thanks to The Book People's bargain prices, I’ve been having a lovely time reading the whole series of Daisy Dalrymple novels straight through. I love the covers, but the blurbs do the books no favours.
‘For fans of Dorothy L Sayers’. Not. There is no comparison.
‘Well heeled Daisy…’. Not. The whole point about Daisy’s life is that she is trying, in the early 1920s, to be an independent working woman. Her brother, heir to a viscountcy, was killed in the First World War. Her father died in the Spanish flu epidemic, and the title and Daisy’s childhood home went to a cousin. Rather than live with her mother, the Dowager, or with the cousins, Daisy sets up in Chelsea with her equally well connected friend Lucy. Daisy writes, Lucy is a photographer.
’Flapper’. Not. Throughout the series, Daisy laments the curvaceous figure which means the straight up and down styles in fashion can never suit her. She buys her clothes in Selfridges’ bargain basement, drinks little and rarely goes to parties.

In the very first book, Death at Wentwater Court, Daisy has been commissioned by a Country Life-type magazine to write up the house. An unpopular house guest is found dead, Daisy’s photographs of the scene suggest murder, and so Daisy begins her habit of ‘falling over bodies’. Her great gift is that, thanks to her ‘deceptively guileless blue eyes’, people are always happy to confide in her. She’s just as good at talking to servants as to the aristocracy. The policeman called in to investigate is Detective Chief Inspector Alec Fletcher of Scotland Yard. He’s often asked to take on this sort of case because he’s educated, well spoken and able to get on with upper class types without being overawed by them. Daisy’s first impression is that he is ‘scrumptious’. Aha!

The growing relationship between Daisy and Alec is just as interesting as the murder stories. She is smitten but wonders if he’s really interested. He worries about whether the daughter of a viscount can marry a middle class widower, ten years older than she is and with a daughter he dotes on. Daisy infuriates Alec by so often being on the scene of a murder and by her ‘meddling’. Even more infuriatingly, Daisy is often right in her judgements of character and her insights into what might have happened. Daisy is annoyed whenever she feels her input is undervalued. Both characters are so jolly nice that it’s a pleasure to read about them. The stories are a mixture of the macabre and the domestic. Some mysteries are better than others, but that’s true of most detective series. I find these books very enjoyable light reading and say, ‘Hurrah for Carola Dunn’.
Collapse