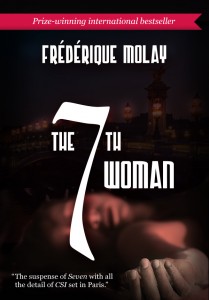 Not franglais, but an imprint set up by the translator Anne Trager because, ‘There are way too many good books being written in France not reaching a broader audience.’ Company motto: ‘If we love it, we translate it.’

I have a backlog of books on the Kindle which I’ve received from NetGalley. I made a start on it with The 7th Woman by Frédérique Molay. The book was first published as La 7e Femme, won the French crime fiction award the Prix du Quai des Orfèvres, and was a bestseller. Here’s what the publishers say about it:

‘There’s no rest for Paris’s top criminal investigation division, La Crim’. Who is preying on women in the French capital? How can he kill again and again without leaving any clues? A serial killer is taking pleasure in a macabre ritual that leaves the police on tenterhooks. Chief of Police Nico Sirsky—a super cop with a modern-day real life, including an ex-wife, a teenage son and a budding love story—races against the clock to solve the murders as they get closer and closer to his inner circle. Will he resist the pressure? The story grabs you by the throat and doesn’t let go until the last page, leading you behind the scenes with the French police and into the coroner’s office. It has the suspense of Seven, with CSI-like details, giving a whole new dimension to Paris.’

I confess I nearly gave up on this book after the first murder, which is so horrific I didn’t think I could stand any more. All the murders are identical; the killer has taunted the police with his promise to kill ‘seven women in seven days’. The question is, which women? And how can the police prevent further crimes with so little evidence to go on? This is the problem for Nico Sirsky, Head of the Paris Criminal Investigation Division, the Brigade Criminelle or La Crim'. Nico is young for his job and apparently drop dead gorgeous as well. I liked him and all his colleagues so I kept reading because of the engaging characters and the thrill of the chase. By the time I was half way through I could hardly put it down, and raced towards the end. Nico’s team realise they are dealing with a clever sociopath who tricks them with red herrings and seems to be getting at Nico personally by threatening people close to him. Who on earth can know so much about the cops?

I enjoyed learning about French police procedures, loved the Paris setting, and found this a very pacy read. Anne Trager is right. We should get the chance to read more French novels.

I have a couple more French crime novels lined up but meanwhile I’m reading this, also from NetGalley.