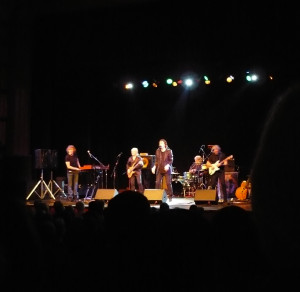 Picture this. Seven in the evening and I’m flipping idly through the local free magazine, when I notice that The Zombies are playing the Tiv at eight o’clock. Phone up: ‘Any tickets?’ ‘Yes, come on down.’ Get changed, put a new face on, abandon everything and whiz down to town. Lovely warm evening for a change. Buy a ticket: 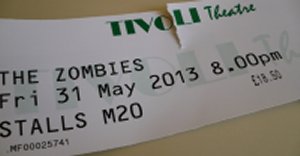 £18.50 to hear Colin Blunstone! Take that, BIC and other huge venues. Amazingly there were a few empty seats; have the people of Wimborne really got better things to do on a Friday evening?

The band started on the dot of eight o’clock, which always pleases me, and launched straight into I Love You. The setlist was pretty much the same as this one, with added treats of God Gave Rock And Roll To You and a lovely version of You Really Got A Hold On Me which segued into Bring It On Home To Me and back again. It was a very full set which included old songs, covers and songs from the 2011 CD they’re plugging, Breathe Out, Breathe In.

Rod Argent talks too much. Colin Blunstone just stands there looking smiley and lovely and then sings. Boy, can he still sing, and get ALL the top notes without apparent effort. It’s amazing how well his voice has held out after all these years (fifty two since they first played together) and how well he got through an evening of non-stop vocals. Five guys on stage and they all looked like they were having a good time. I wish the same could be said of the audience. Even though I’m hem hem years old, I enjoyed the first part of the set so much I felt like standing on the seat and shouting, yet around me there was barely even a nodding head. That’s when I felt suddenly lonely and missed the person who would once have sat beside me on these occasions. There was a man who knew how to enjoy a gig. I don’t regret going. For the first time since I heard the song on the radio in 1964, I got to hear Colin Blunstone sing She’s Not There, live on stage. And it sounded just as good.
Collapse