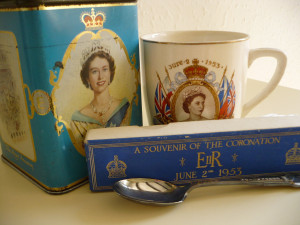 Last year, some friends and I got together for a Jubilee evening. We had Coronation Chicken and Jubilee champagne and looked at coronation memorabilia. I was surprised to find that people my own age could remember nothing at all about the Coronation. My own memories are little more than a series of images. A wet, grey day and going to the house of my great aunt’s friend because she had a television set. A vague memory of a room full of people and a very small screen. Later, going with the same aunt to the ABC Broad Green (long gone) to see a colour film of the coronation. It was on with a black and white film of Life with the Lyons; Ben and Bebe Daniels were very popular on the wireless at that time. A party held for all the children in our road. It wasn’t in the street but some nearby hall and we were all in fancy dress. There’s a newspaper clipping with a photo of this somewhere, but I can’t lay hands on it just at the moment.
( Collapse )
Collapse