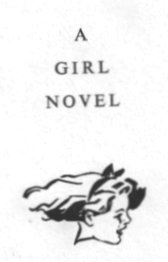 Along with my Persephone books haul at the boot sale on Sunday, I bought Wendy and Jinx and the Missing Detective by Valerie Hastings (1957). Wendy and Jinx featured for years in a strip in Girl comic; perpetual fourth formers at Manor School, always spending more time solving mysteries than doing lessons. I used to love them when I was about nine; I think it was the uniforms :-) This book is one of several Girl Novels published by the Hulton Press. The other Girl characters who made it between hard covers were Belle of the Ballet and Susan of St. Bride’s.* 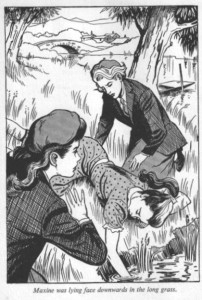 Jinx is captain of the form and a natural leader. Wendy is planning a career on the stage. They are best friends but get on well with nearly everyone at school, although there’s rivalry between houses. There are two threads to this novel. One concerns the fourth’s horror when they find that their house mistress Miss Brumble is writing what they consider a truly awful play about fairies, which they are expected to act in. Naturally, being wholesome, sensible girls, they do everything they can to sabotage this ill-conceived project. The second and main plot involves a new girl, Maxine, who is rather mysterious and obviously hiding a great secret. Our heroines have the secret out of her in no time. She and her mother have escaped to Paris (from behind the iron curtain) but don’t know where Maxine’s father is. Oddly, the new science master at the school, Mr Flint (Flint by name and by nature) knows Maxine but cruelly flings her away when she tries to question him about her father. Then he buys a ramshackle cottage in the woods near the school (inexplicably, the girls seem allowed to roam at will), but claims he lives some distance away. There’s a connection between Flint, Maxine’s father and an American art dealer (would you believe a Ruritanian-style inheritance?) which Wendy and Jinx ferret out. How could they not, when Miss Brumble and Mr Flint have identical briefcases?

This is really a school story only in name, although something is thrown in about dorms, tennis matches, and even teachers, to make a setting. Silly as it is, I really enjoyed it and will look out for the other novel about the girls, Wendy and Jinx and the Dutch Stamp Mystery. Valerie Hastings wrote two other school stories: Jill at Hazlemere and Jill Investigates. They were published by The Children’s Press, so they’re quite easy to find. Here’s how the Manor School girls appeared in colour in a Girl annual. 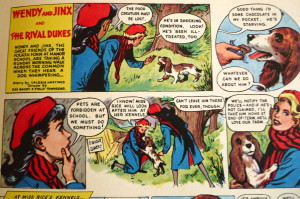 *Edit: I've just seen there was a Claudia of the Circus book. I don't remember her.
Collapse