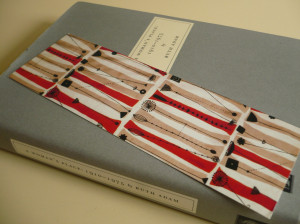 A Woman’s Place 1910 – 1975 was part of my recent Persephone trawl. I found it one of the best general books on the subject that I’ve read. Ruth Adam charts the changing attitudes towards women’s work during the twentieth century. Virginia Nicholson’s Singled Out covers some of the same ground; Adam points out that there was already a surplus of women *before* the First World War. Many women, of course, had always worked outside the home: mill girls, agricultural workers, domestic servants and shop assistants. The changes applied to middle and lower middle class women, especially those with professional qualifications which seemed to threaten male bastions. Many people, women as well as men, considered that housekeeping and bringing up children was woman’s highest calling, and the ideal. Two world wars changed that. The new assumption was that homemaking could easily be a part time job while women did war work. This led to further social changes as provision had to be made for looking after children while their mothers worked. For the first time the state became responsible for infant care.

After each world war, everything changed again and once more women were expected to stay at home. It’s depressing to read how (with a few noble exceptions) Labour Party and Trades Union members were a major obstacle to women’s equality at work. Now, we take equal pay for equal work for granted, but many bitter battles were fought over it. (The only job I would except from equal payment is that of women tennis professionals. With Wimbledon starting tomorrow, we shall see again that women players are far less entertaining than male ones.) I found the first part of the book livelier than the second. When writing about the early years, Ruth Adam quotes extensively from novels of the time; H G Wells, John Galsworthy and George Gissing are just some of the authors referred to. (I was immediately fired up to read Ann Veronica and thought I would be able to get it free for the Kindle. Unfortunately not! Yes, I know it’s on Project Gutenberg but I still haven’t found a simple way to transfer files from there to my Kindle.) I think Ruth Adam was perhaps less comfortable writing about the sixties and seventies (she was born in 1907). The quotations disappear and from being sure about what was right and necessary (votes, equal pay), she finds herself on less safe ground and questions whether the sexual revolution was altogether a good thing for women. The back dustwrapper flap of the Persephone edition tells us that Ruth Adam ‘wrote twelve novels … all of them concerned with social issues.’ No mention of her work for Girl comic.
( Collapse )
Collapse