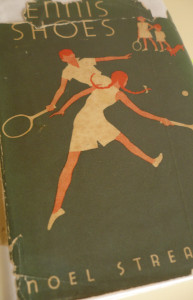 Watching Wimbledon on Monday, I suddenly wanted to read Tennis Shoes again, so I did. The book was first published in 1937 and features the Heath family: twins Jim and Susan, Nicolette, known as Nicky, and baby David. The children’s grandfather was once a crack tennis player; their father could have been good if he hadn’t suffered a leg wound in the First World War. Father, Dr Heath, is depressed because English sportspeople used to beat the rest of the world but now they don’t. This is not nationalistic thinking on his part, more sadness at a perceived loss of physical fitness. So he’s keen for his children to become ‘first class’ at something, picks tennis as the most likely sport for the family and starts coaching them. I must say straight away that I dislike Dr Heath, who pressurises the children in quite the wrong way. Conscientious Susan is the last girl who should be pushed to do anything while rebellious Nicky will obviously react against being told what to do.
( Collapse )
Collapse