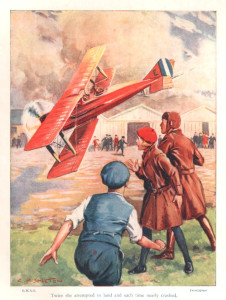 From The Giant Modern Annual for Girls, Sunshine Press c.1937.

Have you read any Worrals books? Or the flying adventures written by Dorothy Carter? Until the end of the Second World War, the daring young aviatrix was a standard heroine in girls’ stories. There’s even a school story in which a girl lands a plane on the playing field. If anyone can jog my memory as to which book it is, I’ll be very grateful. In the fifties and sixties girls stopped being pilots and became air hostesses instead, as in the Shirley Flight series. Now Elizabeth Wein has written two YA books about the women pilots of the Air Transport Auxiliary, the ATA.

I started with Rose Under Fire (just out in the UK and not yet in America), because it came from NetGalley. It’s listed as ‘a companion novel’ to Code Name Verity so I downloaded that, too (it’s very cheap for the Kindle). I’d recommend anyone else to read the pair in the right order. Rose Under Fire is set in 1944, after D-Day and the liberation of Paris. Rose Justice is eighteen and from Pennsylvania. She’s been flying since she was twelve and is well able to ferry Tempests and Spitfires around as required. She knows reams of poetry off by heart, especially the poems of Edna St.Vincent Millay, and writes poetry herself. This is quite important to the plot. Her outfit is based on the Hamble (near Southampton; see also Nevil Shute’s Requiem for a Wren). She's close to Maddie, who has lost her best friend ‘killed in action’. The understatement of this, and Maddie’s bravery, only become clear when you’ve read the first book.

So, Rose. She has an uncle who is very influential in high places. Through him she gets a more interesting job than transport and is thrilled to ‘buzz the Eiffel Tower’. Then, on a more routine mission, she gets caught by two German planes and is forced to land. She ends up in Ravensbruck. Back home, she is presumed dead and her boyfriend marries someone else. As Rose realises, the more inevitable the German defeat, the more desperate the Nazis become and the more likely they are to kill all prisoners. The horrors of camp life are made clear but also the loyalty and friendship in the little ‘families’ forced together. To be honest, I found some of this rather boarding school, with the prisoners as schoolgirls outwitting the guards/staff. I also got a little tired of Rose’s poetry, although I loved her Girl Scout songs! The spell in the camp is a useful device for showing the sufferings of the occupied countries, as Rose lives with girls of several nationalities. Their suffering and bravery are made clear. We learn all this because Rose writes the story after the events, in a room in the Paris Ritz. The poor girl is a physical and mental wreck. Can she recover? Will she testify to the horrors she’s seen? The slogan of the women in the camp is ‘Tell the world!’ And Rose does. 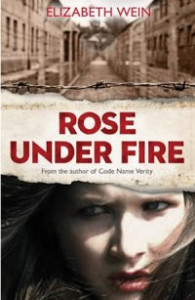