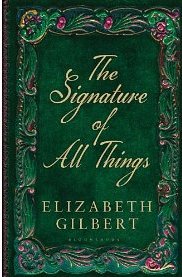 As soon as I started reading this book, I knew it was something special. By the time I'd finished it, I was thinking it’s probably the best book I’ve read all year.

We begin with the birth of Alma Whittaker in 1800 to her English father, Henry and his Dutch wife Beatrix. The story then switches to the remarkable life of Henry Whittaker up to that point: his journey from poor son of a gardener at Kew to plant hunter for Joseph Banks, entrepreneur and now richest man in Philadelphia and master of the estate he has built for himself, White Acre. As the only surviving Whittaker child, Alma gets all her mother’s attention. She is educated according to Beatrix’s strict Calvinist principles to apply reason and logic to all knowledge. A clever child, she becomes something of a prodigy, familiar with several languages, well grounded in science and able to converse with the intellectuals around her father’s dinner table. There is no time in Alma’s life for play, or friendship with other children but this doesn’t bother her.

Life changes when her parents adopt beautiful Prudence and Alma understands her own lack of any physical attraction. As she grows older and begins to think of love, this makes her life hard. Having the run of her father’s library, she’s discovered books about sex which disturb and influence her. She continues with her scientific research, which she has a great aptitude for. When she discovers mosses, she realises that she has found her life’s work; the reader comes to appreciate their beauty as much as Alma does. What a remarkable young woman to find in early nineteenth century Philadelphia! A botanist whose papers are accepted by scientific journals; a woman scientist as good as any man in spite of her lack of a university education.

Alma is a wonderful observer of nature and has the mind to make connections, those leaps which lead to new discoveries. When it comes to people, her judgement is less sure. She falls in love with a man who is her complete opposite, to whom feeling, rather than reason is what matters. It’s years before she realises she has been wrong about other people, too, like her sister Prudence. She travels, she thinks, she writes and eventually produces a thesis of astonishing originality. Does she become world famous as a scientist and thinker? No, but to the end of her life she maintains her curiosity in the wonders of the natural world.

This book is about botany, about travel, about love, about scientific research. I’ve no way done it justice here. It’s so thoroughly researched yet the research so lightly borne. So full of vivid characters like coarse, irascible, astute Henry Whittaker and Sir Joseph Banks, whom Henry hated. So very well written in its descriptions of sea voyages and the places they lead to: South America, Tahiti, Northern Europe. Above all, there’s Alma: awkward, ugly, indomitable, following her own path and blazing a trail for educated women of the future.