I was disappointed by the knitting programme. The films were good, especially the old black and white shots of women knitting Fair Isle patterns at astonishing speed while herding sheep at the same time. It was the voice over which was the problem; I felt it had a slightly mocking tone throughout which was at odds with the seriousness of the knitters. As for the old patterns, I seem to have most of them! The Beatles appeared because they popularized black polo neck (roll neck, according to the prog.) sweaters which everyone then wanted. 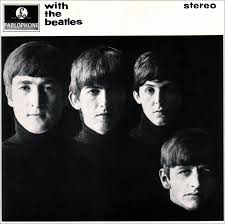 Polo necks were cool, as shown by the fact that cool people wore them, like Steve McQueen in Bullit. 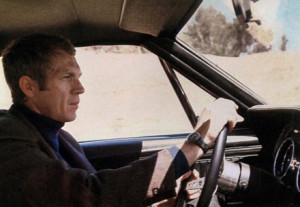 I confess I still think black polo necks are pretty cool, also Cuban heels. Blue, not so much. I couldn’t agree with the programme makers that knitwear went out completely in the 1980s and 90s. 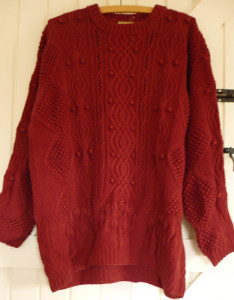 This oversized sweater by Nicole Farhi is from that era, as is this BikBok cardigan. 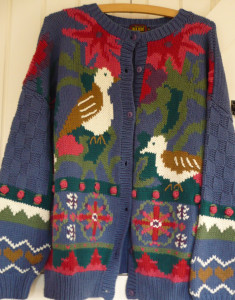 The Beatles turned up again in Sound of Cinema, illustrating the innovative use of pop music in films; in their case, using their own songs in A Hard Day’s Night (still one of my favourite films) instead of employing a composer. We also had a brief glimpse of Adam Faith in Beat Girl, Yay! I’ve yet to see that film. Then there was Steve McQueen, in his blue polo neck, epitomizing cool to the soundtrack of Bullit. I’m enjoying this film series very much but there should have been a health warning before yesterday’s episode. Viewers of New Tricks this week were warned that it contained ‘upsetting’ scenes. What? It was nothing at all, you see worse things on the news every day of the week. No warning, though, that Sound of Cinema would include scenes from films by Quentin Tarentino. I had to look away; I could never watch anything of his.
Collapse