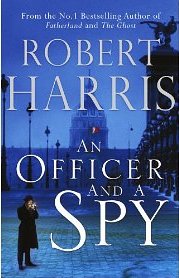 I love spy stories, so I was delighted to be offered the latest book by Robert Harris. An Officer and a Spy is a fictionalised account of l’affaire Dreyfus, one of the most notorious miscarriages of justice in modern history and an event which rocked France and aroused international interest. A good subject, but would it be possible to make a thriller out of a story when the outcome is already known? I needn’t have worried. By writing this account as if narrated by one of the people most involved in the case, Robert Harris provides day by day, detailed descriptions of events as they unfold and really brings the past to life for the modern reader. Some of the topical references grated on me slightly, e.g. ‘I had tickets to the Salle d’Harcourt, to attend the first public performance of Monsieur Debussy’s Prélude à l’après-midi d’un faune’. This is a minor detail; I don’t know when I’ve enjoyed an historical novel more.

In the 1890s, France is still suffering the effects of the disastrous Franco-Prussian war of 1870; the protagonist, Georges Picquart, is himself a displaced Alsacien. The army High Command is full of suspicion and paranoia. The book opens with the degradation of Alfred Dreyfus, found guilty of treason and sentenced to a living hell on Devil Island. The government, the army chiefs and the public are relieved that the traitor who sold secrets to the Germans has been dealt with and the case closed. Enter our hero, army officer Picquart, who has been involved in the trial. Having pleased his masters, he is promoted to Colonel and appointed head of the euphemistically named Statistical Unit, i.e. Intelligence. This puts a few noses out of joint but Picquart is ambitious and takes on a job he doesn’t much relish.

A chance remark by a friend leads him to ‘The tiniest speck of – no, I shall not call it doubt, exactly – let us say curiosity lodges in my mind, and not so much about Dreyfus’s guilt as his punishment.’ The fun begins when he finds evidence of another spy within the army and begins a fresh investigation. ‘At some point I seem to have ceased to be an army officer and become a detective.’ Slowly he comes to the horrifying conclusion that Dreyfus is innocent and the ‘secret dossier’ which convicted him is worthless. His attempts to pursue the other spy and acquit Dreyfus are met with a stone wall of army intransigence. The High Command is prepared to lie and kill in order to cover up its mistake. Picquart is ordered to stop his investigations: ‘…you will drop your pernicious insistence that Dreyfus is innocent. Otherwise the consequences for you will be grave.’ Will Georges have the courage to go on? It’s this dilemma which is at the heart of the book. ‘The thing is, I have no wish to destroy my career. Twenty-four years it has taken me to get this far. Yet my career will be pointless to me – will lose the very elements of honour and pride that make it worth having – if the price of keeping it is to become merely one of the Gonses of this world.’

Picquart does the honourable thing, with dire consequences. In the second part of the book he is no longer alone, as leaks have made some of the details of the case publicly known. He associates with other Dreyfusards: ’On Sundays I begin regularly to go for lunch at the home of Madame Geneviève Straus, the widow of Bizet, on the rue de Miromesnil, along with such new comrades-in-arms as Zola, Clemenceau, Labori, Proust and Anatole France.’ As the end approaches, tension mounts as the two sides battle it out and the world’s press descends on France to report on the sensational events.

The Dreyfus Affair was all about anti-Semitism. The casual way in which officers are pleased to fix on a Jew as culprit, the references to Dreyfus as ‘a regular Jew’, the Parisian crowd baying, ‘Down with the Jews!’ ‘Death to the Jewish traitor!’ are sickening. It comes as no surprise to learn from a footnote that one of the army conspirators was later ‘Head of Jewish Affairs in Vichy France.’ Sadly, much about the Dreyfus case is still relevant, both the anti-Semitism and the issue of the power of the state, which could organise a Kafka-esque conspiracy against an innocent individual. In these days when few people seem to learn any history, An Officer and a Spy provides an excellent introduction to French politics before the First World War and is also a fast paced spy story. Highly recommended.

Astonishingly, you can hear the voice of Dreyfus in 1912 here.
Collapse