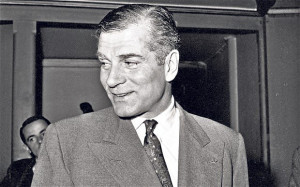 Photo from The Telegraph

Those words from Othello, spoken by Olivier, were heard over the credits at the end of yesterday’s Arena programme (one of two): The National Theatre. Although ostensibly about the history of The National Theatre, fifty years old this month, the programme was largely about Olivier. The same is apparently true of the books published to tie in with the anniversary. According to the reviewer in Private Eye, both Michael Blakemore’s Stage Blood and the Derek Jacobi autobiography As Luck Would Have It are really books about Olivier. I’ve requested both from the library, together with Philip Ziegler’s new biography of Olivier, but I’m still waiting for them.

The early National Theatre programmes all included ‘A short History of The National Theatre’, starting in 1848. Arena had little to say about that, just some ancient footage of George Bernard Shaw and a photograph of Harley Granville-Barker. The TV version began in 1963, when The National Theatre was finally established at The Old Vic theatre, with Laurence Olivier as its first director. It ended in 1973, when Olivier was replaced by Peter Hall. Olivier was kept out of the loop; he and many others saw this as an act of treachery. After all these years, scores are still being settled. Joan Plowright spoke loyally, Jonathan Miller less so. How I dislike that man. I don’t think there can be any doubt that without Olivier’s charisma there would have been no NT.

Olivier ran the Old Vic as an actors’ company, with himself as just one of the actors. That was the theory. In practice, of course, many of those working with him were completely overawed, by his already legendary career and his sheer physical presence. Most of the actors, though, look back at that time with fondness. It’s a pity that old black and white footage of extracts from the plays gives little idea of a live performance. As the Private Eye reviewer said, probably only the film of The Entertainer gives modern audiences a glimpse of Olivier’s magnetism on stage. I’ve written something about this before.
( Collapse )
Collapse