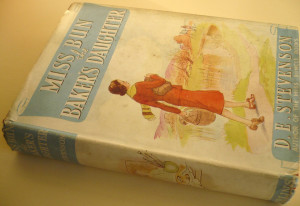 The heroine isn’t really called Miss Bun, of course. Her name is Miss Pringle and she is a baker’s daughter. Sue Pringle’s mother is dead and her father, a domineering man whom nobody likes, forces Sue to leave school at fourteen in order to keep house for him. Then he marries again, and two women in one house just don’t fit. So here’s Sue: nineteen years old, uneducated, living at home in a small Scottish border town and depending on her grandparents for love and kindness. One day, wealthy Mrs Darnay is in grandfather’s shop bewailing her lack of a cook. Sue immediately offers her services, to grandfather’s distress. Her mind made up, Sue packs a case and sets off for Tog’s Mill. Little does she suspect Mrs Darnay’s cunning plan. She and her French maid disappear in the night, leaving Sue alone in the house with Mr Darnay, an artist. She decides that he is helpless around the house and declares that she will stay to look after him. The impropriety of the situation is obvious to all but the two involved and Sue is quite a strong-minded young woman. She finds herself fascinated by Darnay’s work, conversation and attitudes. Without realising it, she is being educated at last but also, just to complicate matters, falling in love with him. The rest of the book is about what happens, much of it highly unlikely but Romantic.

What’s worrying about that? I hear you ask. This book was first published in 1939. At one point Sue says, ‘I like Franco. He has a nice face.’ ‘Stupid, ignorant girl’, you think. Ignorant she may be, but the reader is not allowed to think her stupid; rather, according to D E Stevenson, she embodies all the sterling qualities of the lowland Scot. Towards the end of the book, Sue has tracked down Darnay’s London dealer, Hedley. The following appalling conversation takes place.
‘Gaga!’ declared Edward, waggling his head idiotically.
‘Gaga!’ cried Mr Hedley indignantly. ‘Why on earth can’t you speak English? Need we have Yiddish words foisted upon us? It’s time Hitler …but no matter.’
Time Hitler what? Am I reading this wrongly? I’m usually tolerant of outmoded and repugnant attitudes in books written between the wars, saying, autre temps, autre moeurs, but this is 1939! This one brief incident put me right off the book and off Stevenson.

The charm of the book lies almost entirely in the descriptions of the landscape, language and people of lowland Scotland. None of the characters engaged me much. I’m thankful that D E Stevenson wrote better books than this one, and it will be a while before I read another.
Collapse