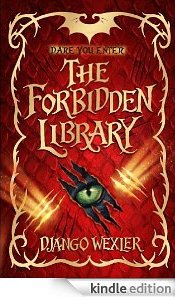 A heroine called Alice, talking cats, library shelves which move around to trap you in a labyrinth, fabulous creatures out to do you harm. Are we in Wonderland? Nope, The Forbidden Library.

Like her famous namesake, Alice Creighton is an intelligent, sensible girl. A motherless, only child, one day she sees her father arguing with a fairy (as you do) and her life changes forever. Her father disappears and is presumed dead; she is sent to stay with her ‘uncle’ Geryon, who turns out to be a wizard, And, wouldn’t you know it, Alice has powers she never dreamed of and Geryon has had his eye on her for years. As is well known, I’m not big on fantasy, particularly when it involves ‘chosen ones’ (predestined for a hard life, poor things), and special gifts. This time, my usual objections didn’t bother me. Alice’s personal quest is to track down the ‘fairy’ and find out what has happened to her father. That’s private, though. What matters for her survival is how she copes with the scary household she finds herself in and struggles with a series of dangerous tests.

What makes this book so original is the idea of the library, which is both an actual building and another world. We all know the expression ‘lost in a book’. I might think, ‘this is all very stressful, I’ll hide in Mansfield Park for a while.’ In the forbidden library, losing yourself in a book literally happens; Alice can actually enter a book and the world it contains, which is often a frightening one. Poor Alice is in a new life where she can trust no one, not even Ashes the cat, who seems to be her friend. I found this a very visual book, which is why I think it will appeal to children. It would make a great animated film; I can picture it myself. You may spot a few Potterisms: a tree very like the Whomping Willow, for example, and books which it is dangerous to open, but Alice has fewer options than Harry to help her overcome her enemies, who are many. The ending leaves scope for a sequel, which must surely follow.

I read this book courtesy of NetGalley. To be published 3rd April by Random House.
Collapse