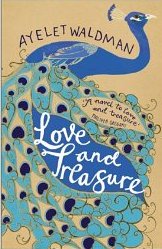 Here’s the publisher’s description: ‘Salzburg, 1946. The Hungarian Gold Train, loaded with Jewish treasure. A dazzling jewelled pendant in the form of a stylized peacock. And three men who find their carefully-wrought lives turned upside-down by three amazing and fierce women, each locked in a struggle against her own history and the history of the last hundred years.’

This book begins in the present day with Jack, a Second World War veteran, welcoming his granddaughter to stay. Sadly, she’s come to look after him because he’s dying. Before he goes, he entrusts her with a mission, which we don’t find out about until later.

The next part of the book is by far the best and most interesting. The war is officially over and Jack is in Salzburg with the American forces, trying to bring order to the chaos created by refugees, camp survivors, covert ex-Nazis and so on, all wishing to be somewhere else. Jack doesn’t like the army much but has done well because of his gifts for navigation and for languages. He has a doomed love affair with one of the Hungarian camp survivors. Then ‘the gold train’ arrives and Jack is put in charge of it. It contains a great muddle of household goods with just a few valuable items. At one point, ‘he opened the little velvet bundle, and found a piece of women’s jewelry, a large pendant decorated with an enamel painting of a peacock in vivid purple and green, with white accents. The metal was intricately filigreed, the work of an accomplished metalsmith, and the tip of each peacock feather was inset with a gem.’ It’s this necklace which the story hangs (sorry) on.

Granddaughter Natalie goes to Europe to return the necklace to any heir she can find. She discovers that the necklace is actually a locket containing a photograph of two women: both beautiful, one a dwarf. Now the book becomes a detective story, as Natalie and Amitai, a dealer specializing in looted Jewish property, hunt for the women in the photo and for a painting which is connected to the necklace. Theirs is the second love story. After that, I became bored. The story of Nina, the beautiful girl in the photo, is told as first person narrative by her analyst, Dr Zobel, looking back at events in 1913. Nina is a clever girl from a bourgeois family, whose father wants her declared mad because she disobeys his wishes. This is all very sad but you’d have to be more interested in psychoanalytic techniques in the early twentieth century than I am to cope with the narrative and creepy Dr Zobel.

So, a very mixed reaction to this book, which has what should be a fascinating story spoiled (for me) by the last section. What lifts the book is the underlying issue of what it means to be Jewish. Jack is a non-observant Jew from New York. Should he regard the persecuted Europeans as ‘his’ people? He concludes that ‘it took Hitler to turn him into a Jew’ but as the three stories show, there are many different ways of being Jewish.

Love and Treasure will be published by Hodder & Stoughton on April 10th.
ISBN 9781444763096. I read it courtesy of NetGalley.
Collapse