Yesterday evening I watched The Crimson Field, full of hope that it would be a good WWI drama. Sadly, an hour of blood, butchery and bitchiness left me completely unmoved. I’ve already spotted Frank Burns and Hawkeye; will Matron turn out to be Hot Lips Houlihan?

In complete contrast and rather surprisingly, for the first time ever The Antiques Roadshow, presented from Thiepval, made me cry. 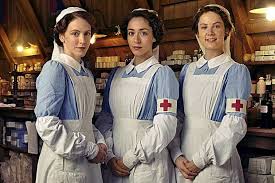 I loved this book from the start; in fact even before the start. As soon as I saw that the cast of characters included some second formers known as The Three Marys*, I knew the book would be the right stuff. It’s subtitled ‘Being an account of The Case of the Murder of Miss Bell, an investigation by the Wells and Wong Detective Society.’ Daisy Wells, daughter of a lord, is beautiful, good at games, popular. She’s also very clever, a fact she even more cleverly manages to conceal. Hazel Wong has been sent to the school from Hong Kong by her rich, anglophile businessman father; unlike Daisy she is on the plump side and not pretty. She is also a clever girl, which is how she spots Daisy’s deceptions and they become best friends. She also knows that far from being the perfect English rose, Daisy is completely ruthless and reckless.

The story is set in Deepdean school in 1934. One day Hazel goes to the gym and to her horror, finds the body of Miss Bell lying there. By the time she’s fetched Daisy and a prefect, the corpse has disappeared and no one in the school refers to Miss Bell again, except to say that she has ‘resigned’. Hazel, Secretary of the Society, writes, ‘This is the first murder that the Wells & Wong Detective Society has ever investigated, so it is a good thing Daisy bought me a new casebook. The last one was finished after we solved The Case of Lavinia’s Missing Tie.’ Like most amateur sleuths (or where would the stories be?) our heroines foolishly decide to investigate the murder themselves without involving the police. Hazel is terrified that the murderer may have seen her in the gym but Daisy brushes such concerns aside. The girls follow many hopeful looking red herrings until there is another murder, the hint of an older mystery and even Daisy realises that they are in danger themselves. The ending is satisfyingly surprising, as you’d expect from a writer who admires Agatha Christie.

The only fault I could find is that at one point a pupil addresses a member of staff as ‘Miss’. Even today, no gel in such a school would do that, as the author should know, having been educated at Cheltenham. Apart from that, I can hardly praise the book enough. If you like mysteries, if you like school stories, if you like a laugh, this book is for you. And here’s hope for all budding writers. The author says at the end of the book, ‘I began to write this book in 2011, for NaNoWriMo. Most of the first draft happened in the break room of the Oxford branch of Blackwell’s Bookstore’. Well done Robin. Now give us some more Wells and Wong, please?

*The Four Marys was a long-running schoolgirl strip in Bunty comic. 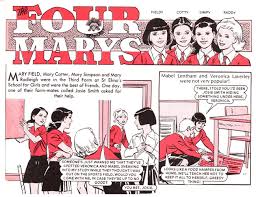 I read this courtesy of NetGalley.
Collapse