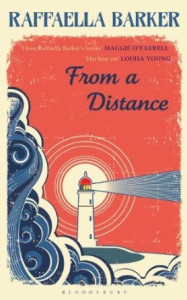 This new novel is quite different from Raffaella Barker’s previous books. It has a plot, a mystery and it moves backwards and forwards in time. The first story is Michael’s. He lands at Southampton at the end of the war. Which war? We just know it’s the Second World War. Something terrible but unspecified has happened to him, turning him into a mess who feels he can’t go home to his parents. Instead, he boards a train for Cornwall, a place he’s never visited, meets and falls in love with a woman and becomes involved in the post-war artistic scene. You get a real sense of place and community here.

Next, we are in more familiar Barker territory with a modern family in rural Norfolk. Barker’s characters have previously been young people with little children but here we have middle aged parents of teenagers. Luisa, daughter of an Italian ice-cream making dynasty (and herself obsessed with making ice-cream) is married to Tom (whom I really liked), a busy teacher who seems not to notice her much. Her children will soon be flying the nest and this mother hen doesn’t like it at all. As usual with Barker, the children are particularly well described and absolutely believable.

The third strand in this mystery involves a new character, Kit, a successful businessman still mourning the death of his mother, who founded the textile business he now runs. He’s amazed to find that his mother has left him something he had no idea she owned: a lighthouse in Norfolk. This lighthouse, gaily painted in red and white stripes (so why is the cover wrong, huh?) is key to the whole mystery. Kit meets our family and there’s an immediate spark between him and Luisa. Potential trouble? Here as in Cornwall there is a close-knit community which Kit is soon absorbed into and everything is sunny and rural and lovely and Barker-ish.

I’ve left out the two most important clues so you’ll have to read the book yourself to find out the connection between Michael, Tom, Kit and beautiful vintage textiles. I certainly cared enough to want to know the answer, although when the great revelation came, I almost missed it and thought everyone took the shocks remarkably calmly. I’ve written before about Barker’s books and how I love Summertime. I could never love this book as much but it is an enjoyable read. I did prefer the Norfolk sections to the Cornish ones.

From a Distance will be published by Bloomsbury on May 8th and I read it courtesy of NetGalley.

Query: why do people these days write ‘phased’ for ‘fazed’? It occurs twice in this book. Just asking. 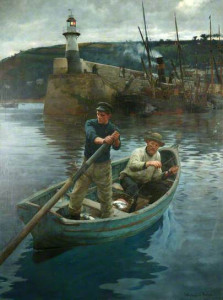 The Lighthouse (Newlyn, Cornwall) by Stanhope Alexander Forbes. Picture from BBC Your Paintings. Yes I know it’s the wrong colour and slightly early for the period described in the book, but it seems to suit it.
Collapse