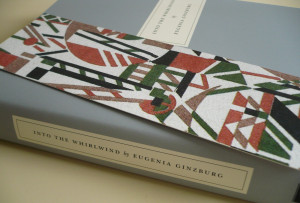 This is the second new release Persephone have sent me and to be honest I wasn’t much looking forward to reading it because of the heavy subject matter: Ginzburg’s sufferings as a result of Stalin’s Purges of the late 1930s. Anyone coming to this book without prior knowledge of Russian history might think it a work of fiction, so fantastic are the charges brought against Ginzburg and other Party loyalists, so nightmarish the atmosphere of fear and suspicion.

Eugenia Ginzburg was an academic, married and with two children, when she was arrested in 1937, as the Great Purge began. Although completely innocent of ‘terrorism’ she was sentenced to ten years’ imprisonment (it turned out to be eighteen years) and this book covers the first three years of her incarceration. For two years she was officially in solitary; then, with other ‘politicals’, she was moved, in a railway truck labelled ‘special equipment’, out to a labour camp which seemed to be at the ends of the earth. She describes the area as ‘neolithic’. If you’ve read One Day in the Life of Ivan Denisovich and The Gulag Archipelago, the privations described in the book come as no surprise but Ginzburg keeps your interest throughout because it’s such a personal story and she writes so vividly of her fellow prisoners.

Perhaps the most surprising aspect of her experiences is the passionate desire to live, when so often it must have seemed easier just to give up and die. Through interrogation, punishment, malnutrition, illness, frostbite, the loss of her family, she never gave up. It’s a great testament to her physical endurance but above all to her mental strength, that she kept going all those years. She stayed sane by reciting poetry, of which she seems to have memorised an astonishing amount. She describes her joy when, officially still in solitary but now with a cell mate, she is able to borrow books from the prison library and the two of them almost go blind, reading, reading, reading in poor light. That was luxury compared with life later on in the camp where so many others died. Once her sentence was completed, Ginzburg was condemned to remain in exile and was not ‘rehabilitated’ until 1955.

There have been criticisms of the book, which Rodric Braithwaite discusses in an Afterword. Ginzburg remained a Communist, blaming Stalin but never Lenin for the ‘mistakes’ which resulted in possibly twenty million deaths. As a Party member, she was perhaps partly responsible for what happened. Fellow survivors have pointed out inconsistencies in her story and have described her as ‘lucky’ or only interested in what happened to her fellow intellectuals. As Braithwaite points out, we who have never lived under a dictatorship have no right to throw stones. Whatever its faults, it’s a remarkable and important book. Into the Whirlwind was first published in the UK in 1967. It makes me angry that even after this and similar testaments appeared, some people in the West, (Eric Hobsbawm, frex), remained wilfully blind to the evils of Soviet rule. As for Philby and his ilk, they are beneath contempt.
Collapse