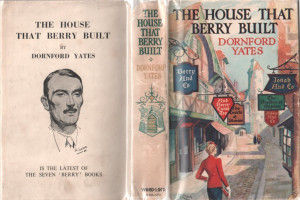 This month, my bedtime reading has been mostly Dornford Yates and it’s the Berry books which I’ve been re-reading. In spite of all the criticisms of the books which I’m about to make, there always will be re-reads. This must be the clue as to what makes a best-selling author, as Yates was between the wars. There are ten (?) Berry books plus a later compilation volume. They concern the adventures of the Pleydell family.

Berry (Bertram) Pleydell is head of the family and the funny one (how funny he really is depends upon your mood). He’s highly loquacious and likely to launch into long, fantastical speeches at any moment. He is married to the beautiful Daphne, whom he occasionally refers to as ‘my hag’. Daphne is for me the most normal of the female characters in any of the books; she occasionally occupies herself with mundane matters such as housekeeping. She puts up with a lot from Berry but it’s clear they are a devoted couple. The Brother of Daphne is Boy Pleydell, who narrates the stories. They have two cousins: Jonathan and Jill Mansel. Jonathan, ‘Jonah’, is a tough character who also features in the Chandos yarns, a real man of action. I have a letter written by Dornford Yates to a fan in which he says, ‘No, I don’t think Jonathan Mansel will ever marry.’ (Boy does, twice.) Hmm, if you ask me, there’s a touch of Ralph and Ted in Jonah’s relationship with his servant, Carson. Jill is a worrying enigma. She is ageless; she’s like a fairy tale princess with her golden hair and ‘great, gray eyes’. She is completely artless. Artless? To me she seems positively simple and it’s a mystery what she does with herself all day. The efforts of the entire family to protect Jill not only from harm but from the slightest distress or anxiety lead one to think that she must be somewhat lacking. There are dogs but no children.
( Collapse )
Collapse