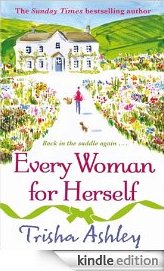 I’ve written before about how much I enjoy Trisha Ashley’s chicklit for the intelligent person. In no time we have references to the Bröntes, Jane Austen, Charles Dickens (I found ‘Barkis is willing’ very funny), Frank Zappa (that’s an unusual one) and Bob Dylan. Her books are always well written, with nothing to irritate. Every Woman for Herself was first published in 2002, so is earlier than the others I’ve read.

You wouldn’t expect a book which begins with a divorce and a case of manslaughter to be funny, but Every Woman for Herself manages it. Artist Charlie Fry (née Rhymer) is suddenly informed by her rat of a husband that he’s divorcing her, everything is fixed and she just has to sign a few papers. Shocked, if not that sad, she prepares to go back to her family for a while. Home is the Parsonage (an affectation of her father’s, since it’s no such thing), inhabited by a bunch of very eccentric characters. Ran, the father, is a writer who keeps a series of mistresses in the Summer Cottage. His latest is Jessica, known as the Treacle Tart. She has moved into the house with her twin girls, an unprecedented threat. Ran hoped to raise an extraordinary family and he succeeded. Tough, outspoken (she’s terribly rude to Jessica) Emily, a wonderful cook, runs the household and dabbles in white witchcraft. Anne, usually overseas as a war correspondent, is home recovering from cancer. Wars didn’t seem to last long once she’d (Anne) arrived – I think they took one look and united against a greater peril. The really clever one is Branwell, an academic whose behaviour is definitely abnormal. He occasionally returns home to recover his equilibrium. The other members of the household are faithful retainers Walter and Gloria Mundi, brother and sister who live in a separate cottage. Gloria is a mother figure for the children. Like Emily, she has the power of sight and tries to interfere in people’s lives (for their own good as she sees it) by reading tea leaves and brewing vile potions.
( Collapse )
Collapse