It's a long time since I posted anything in my occasional series Found in Books. Today AbeBooks has some booksellers' stories on the subject. No bacon! 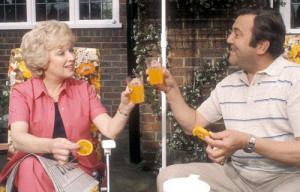 Terry & June is one of those programmes I wouldn’t have dreamed of watching when it was first broadcast and until now I’d never seen a single episode. The advent of Freeview has opened up a new/old world of programmes on channels like Yesterday, ITV3 and Drama. Some I’ve been thrilled to revisit, like When the Boat Comes In with JAMES BOLAM. Others were quite new to me, e.g. Upstairs, Downstairs.

When I saw that Drama was showing Terry and June from the very first episode, I thought I’d see what all the fuss was about. I’m now addicted and record it every day to watch later. I gave myself 10/10 for deducing entirely from internal evidence the date of the first prog: 1979. What on earth do I find to enjoy in it? Terry and June might as well have lived on another planet compared with the life I led at the time.
( Collapse )
Collapse