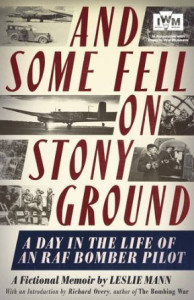 In his brilliant introduction, Richard Overy (author of The Bombing War), points out that although this book is fiction, it is ‘not fictitious’. Leslie Mann (1914 – 1989) joined the RAF in 1939. He flew as a tail gunner until being shot down over Germany in June 1941 during a raid on Düsseldorf, and taken prisoner. It’s thought that he wrote this fictional account of life in Bomber Command sometime in the late 1940s.

The story is written in the third person, describing exactly what Mann’s fictional alter ego, Pilot Officer Mason, did and thought during one day and night while on ‘ops’. The style is spare: ‘Mason did this, Mason thought that’ but the terseness only adds to the sense of grim reality in the account. At the time Mann/Mason was a ‘Bomber Boy’, British airmen were flying Armstrong Whitworth Whitley bombers, already out of date and unreliable. Raids on German industrial sites had been authorised to show that Britain was taking some action against Germany and to raise morale at home. In reality, the ratio of loss of life and machines to bombing success was so poor that these raids were largely futile and the deaths of trained air crew not worth the results. It’s horrible to think of nineteen and twenty-year-olds being sent off to pointless doom in this way. Mann/Mason was very aware of this, which accounts for the bitterness in his story.

Mason describes life on the station: a visit to the local pub, a dance in the mess, a chance encounter with an attractive girl. The preparations he makes for the night’s flight are given in detail, as are the actions of the crew. Once they’re underway, the sense of claustrophobia inside the plane is palpable. Imagine being the rear gunner, exposed in that little Perspex bubble; the navigator, whom everyone depended on to get them to their target and safely back, when they were hundreds of miles from home and solid ground; the pilot, responsible for the safety of his crew. And everyone afraid. This is no Dam Busters.

The bald narrative of events is mixed throughout with Mason’s reflections: on past sorties, on lost friends and comrades (too many), on reasons for fighting. When a new boy asks Mason what an op is like, he replies laconically, ‘Not so bad.’ This is what he’s really thinking:
What could you tell these first-trippers? That it was bloody awful, frightening, sickeningly so, and more often fatal? That each trip got worse? That each time you got back you could hardly believe it? That the ground seemed so solid and firm and friendly and you were just about to feel happy when you realised that it only meant you were alive to go again, and again, and then again, until God knows when?

Pondering on death, as he does almost all the time, he wonders,
Was defeat more bitter than death, was death sweeter than defeat? He supposed so, but he didn’t at this moment really understand it, because death could be achieved any time, in dozens of ways – if defeat was so bad – without taking the lives of others. Living was the difficulty, not dying.
He also makes it clear that he and others he knew were not fighting on, even when they were afraid, for some nebulous idea of sacrificing their lives for their country.
That was the great thing – to be alive at the end of the war with a conscience that was clear and open to inspection and criticism. It had nothing to do with patriotism.
As he makes clear, fear is not the same thing as cowardice; fear was natural.

This is a short book and I think it would be best read at one sitting, to get the feeling of real time, as in Len Deighton’s Bomber. I read this book courtesy of NetGalley and gave it five of five stars, unusually for me. I understand that it’s being published in collaboration with the Imperial War Museum. That’s just as it should be because, in my opinion, this little book deserves to be a wartime classic for its exploration of how it felt to be actively engaged in combat. It will be published by Icon Books on September 4th and I hope it has great success.
Collapse