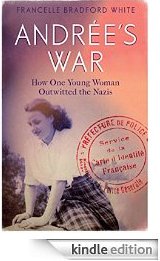 The stories of Odette and Violette Szabo are well known in Britain, largely due to the films about them. We know far less about French heroines of the Resistance and Francelle Bradford White is seeking to put this right with her biography of her mother, Andrée Griotteray. She has based the book on conversations with her mother and uncle over many years and on Andrée’s diaries, using secondary sources for the historical background, which is very complicated.

The Griotterays were a prosperous bourgeois family, able to afford good food and clothes, to travel and to educate their children. Andrée was sent to England for a year when she was sixteen and her younger brother Alain spent a few months in Germany. When war broke out in 1939 Andrée was just nineteen and Alain seventeen. Andrée reflected that her own mother Yvonne, who was Belgian, had been the same age when living in occupied Brussels in 1914. What a sad generation, to have lived through two world wars!

Soon after the occupation, Andrée obtained a job in police headquarters in Paris, working in the passport department. She disliked working for an organisation which collaborated with the Wehrmacht (this is still so hard for the French to come to terms with) but the work offered an opportunity to play her part in resisting the Germans. From the start, she took great risks. She smuggled out blank identity cards, hoping their loss would go unnoticed. Alain founded an undercover newspaper, La France, which she secretly printed at work. She also kept a diary, in itself a dangerous thing to do. The diary is touching in its juxtaposition of war news with a young woman’s preoccupation with clothes, boyfriends and, as the war went on, the search for food. Whenever Andrée was able to have a good meal, she recorded it.
( Collapse )

I've watched it three times already. I can never get tired of this song.
Collapse