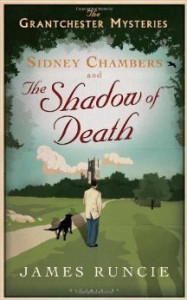 I enjoyed Sidney Chambers and the Shadow of Death when I read it way back. I see I didn’t write anything about it, due to having a broken wrist at the time. I’m currently hobbling about with Achilles Tendonitis; what is it about this book?

Sidney Chambers, the young clergyman who divides his time conscientiously between running a parish and teaching at Cambridge, yet is fond of drink and women, is an attractive character. So I was alarmed when I read the pre-show blurb for Grantchester, based on the first book in the series. ‘Gritty’? ‘ A ‘Ripper Street vibe’? I’ve never watched Ripper Street but it doesn’t sound my kind of thing at all. I just didn’t recognise James Runcie’s book from the description. I watched a recording yesterday evening (fancy putting it on against New Tricks)! There was even a ‘sex and violence’ warning before the programme.

I needn’t have worried. You might just as well put a sex and violence warning before an episode of Miss Marple. Why not sell it as a 1950s period piece about a sleuthing clergyman? Although James Norton doesn’t match the book’s description of Chambers physically, you could believe in him as a man people would confide in. I also liked Robson Green as Geordie, Sidney’s Police Inspector friend. OK, the producers have invented the odd character and altered the continuity of some events but it was all very pretty and I enjoyed it. The book is better and I’m now reading it again. I really must read the next two volumes. 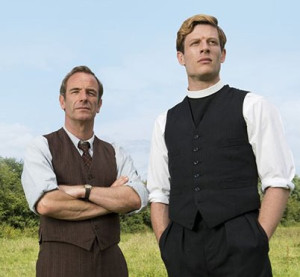