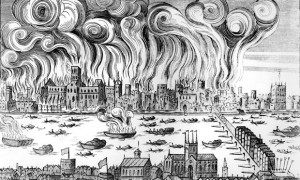 When I was teaching, I once set a class of young boys the task of writing about certain events in the seventeenth century as they might be reported in a newspaper. One effort began with the striking headline:
PLAUGE WIPPED OUT BY FIRE!
My sweet lads. They couldn't spell but they could have made as good a fist at writing historical drama as those responsible for yesterday’s first episode of ITV’s The Great Fire. The hero, Thomas Farriner the baker (Andrew Buchan), was completely modern in looks and speech. The one convincing character was the fictional Lord Denton, played by Charles Dance; the only actor who managed not to look a complete idiot in a wig. Really, it was laughable. And why must all historical dramas impose modern sensibilities on the past? Downton is the worst culprit but it’s true of all of them.
Collapse