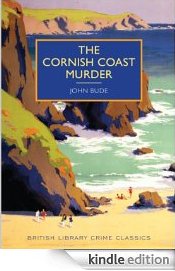 ‘THE Reverend Dodd, Vicar of St. Michael's-on-the-Cliff, stood at the window of his comfortable bachelor study looking out into the night.’

Isn’t that just the way a cosy crime story should start? A study, a fire, a storm outside over the village and the vicar waiting for his weekly dinner date with his friend the doctor. After a good meal, the two divide the spoils from the latest package from the library: all crime fiction novels, since they are addicted to them. Then, the telephone rings, and there’s a real murder right on their doorstep.

Revd. Dodd finds himself in a similar position to Canon Sidney Chambers (Grantchester series). ‘He was experiencing a peculiarly mixed set of emotions. Horror and dismay at the tragedy which had come so swiftly out of the night and put an end to Julius Tregarthan's life. A compassionate pity for the girl who had been so unexpectedly bereaved. But beyond these perfectly natural reactions he was fired with an ardent glow of curiosity and interest.’ The local inspector is surprisingly willing to share information on the case with the vicar and the two work together. Guess what? The professional works out a perfectly sound hypothesis but the vicar’s instinct correctly solves the case. When it’s over, he decides that ‘Murder was all right in books and plays, but in real life it was a sorrowful, suffering business.’ He gives up reading thrillers.

In his excellent introduction, Martin Edwards tells us that early editions of John Bude’s detective novels are almost impossible to find and that many people will be delighted that they've been republished. I enjoyed the book very much as a light crime story but wasn’t overwhelmed by it. I think the popularity of these new British Library editions owes a great deal to the lovely covers.
Collapse