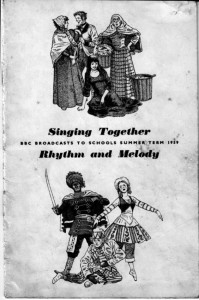 I meant to listen to Singing Together yesterday evening but forgot, so I caught up with it on the iPlayer this morning. Singing Together is the reason I know so many folk songs. At junior school, we would all sit down in the hall, the wireless would be switched on and with the help of our booklets we’d join in the songs, presented by William Appleby. I kept all the booklets and was absolutely furious when my mother gave them away without telling me. These small bitternesses last a long time and a few years ago I bought just one booklet, shown here, on ebay.* The illustrations are by Robin Jacques. We also listened to Time and Tune, for younger children, and Rhythm and Melody.

In those days, broadcasting for children was about ‘improving their minds’. Singing Together was actually fun, though why the producers chose so many seditious Jacobite songs, I don’t know! Apparently, from over fifty years of programmes, only three episodes survive, because the broadcasting was live. Jarvis Cocker was hoping to find some archive from the seventies, when he was at school. After my time but the programme went on long enough to influence people like Lisa Carthy.

I loved this one:
Pleasure it is
To hear, iwis,
The Birdès sing.
The deer in the dale,
The sheep in the vale,
The corn springing.
God’s purveyance
For sustenance,
It is for man.
Then we always
To give him praise,
And thank him than,
And thank him than.

At the end of term we used to vote for our favourite song and the results would be sent off to the BBC. Finding no other hands go up for this medieval one, I was too embarrassed to admit that it was mine. I could still sing it. A fascinating programme, do catch it if you can.

In bed yesterday evening I listened to Counterpoint. So nice that Paul Gambaccini is back and so disgraceful that he was taken off. One contestant picked Bob Dylan for his special round and got every answer right. So did I. Not only that, I even guessed in advance what two of the questions would be!
Collapse