Fans of Dorothy L Sayers and Lord Peter Wimsey will already be aware that the Drama Channel is showing the original 1987 drama series starring Edward Petherbridge and Harriet Walter. I’ve been recording the lot in order to save them on discs. I need to do this because some of our own discs (recorded from an ITV3 re-showing) have become corrupted. This is a shame, because my husband was so clever at this sort of thing that he could record a series and take out the advertisements, something I’ve never found out how to do. It’s also well worth doing, since DVDs of each story currently cost £29.99 on Amazon, so the whole lot would set you back £90.00.

So, as well as watching the Drama episodes as they appear, I’ve been checking the old discs. And what a surprise I got! I found the first two episodes of Strong Poison to be hopelessly corrupted. The third, however, is perfect and is vastly superior to what we’re getting from Drama. The colour, clarity of picture and sound quality are all much better *and* there are more scenes! Yes, fellow viewers, the Drama channel is short-changing us with this series, presumably in order to fit more advertisements into the allotted time. Not that it stops me watching, of course. For me, Edward Petherbridge is just perfect as Lord Peter. 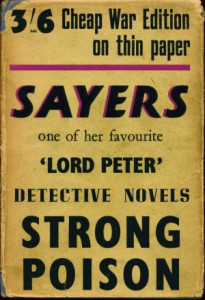 Naturally, watching the programme made me want to read the book again and I did a very silly thing. Wanting to find out if it were available cheaply for the Kindle, I clicked the wrong button by accident and bought it by mistake. Duh! I have two other copies!
Collapse