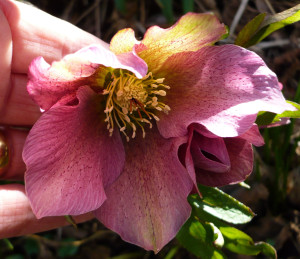 This is a new idea, which I’ll see if I can keep up. It’s easy now, but what about later in the year when there will be lots of flowers to choose from?

The garden currently has plenty of snowdrops, primroses and pulmonarias in flower but my pick is this hellebore, for its triumph over its surroundings. It’s an absolutely bog standard hellebore such as you might find anywhere, unlike these. There were two or three plants in the garden when I moved here. They are either on the bank, and therefore covered by giant ferns for most of the year, or nestling up against the trunk of a giant berberis. I do nothing at all for them except to cut off all the leaves very early in the year; this helps prevent a horrible disease they can get which turns all the leaves black. Every year they flower again. Wanting more hellebores, I bought a lovely white one, planted it in my shady bed, stood back and admired. The next year it had completely vanished. A mystery to me as I’d never known such a thing happen before. It just makes me more appreciative of these old, semi-wild trusties.
( Collapse )
Collapse