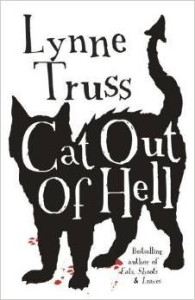 Little did I think when I took out from the library a book by Lynne Truss (amusing writer), that it would turn out to be a horror story which I didn’t dare take to bed with me. But so it was and I found the story so gripping that next day I read it almost at a sitting (it’s a short book). It all starts innocently enough when Alec, a retired librarian from Cambridge University and recently widowed, takes a remote holiday cottage in an attempt to stop brooding about his dead wife. While there, he looks at some files previously downloaded to his laptop, sent to him by a Dr Winterton. He barely knows this Winterton; why has he been sent the files? Reading them is even more confusing. He finds conversations between some people called Wiggy and Roger. But Roger is a cat. Yes, a talking and highly intelligent cat with a strange history: ‘I was born in 1927 …’

When Alec gets home again, he finds that these emailed documents were not sent randomly but that he is in the whole Roger business up to his neck and that his wife’s death may not have been an accident. I won’t give any spoilers but you have to suspend disbelief for a while and accept that cats are basically evil (what?) and that the special powers which a few of them have must be defeated.

The horror aspect of the book is mitigated by the fact that it’s also funny. A very cleverly constructed story, worth a read (unless the thought of evil cats upsets you too much).
Collapse