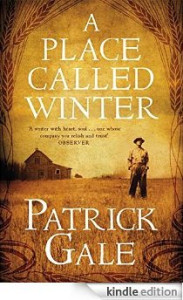 I was about half way through this book when I heard that it would be the subject of Simon Mayo’s Radio 2 Book Club. I was curious as to how a book which includes a violent homosexual rape could be discussed on a family drivetime show and felt obliged to listen. I finished the book first. Patrick Gale is so utterly nice and charming that, hearing him speak, I began to think I might have misread the whole book. I'd wondered how Gale picked this particular theme and it turns out to be his fictionalised account of something that happened in his own family past. Glad to get that sorted out. The only comments from the book club reviewers were (surprise!) entirely favourable and mostly went ‘Wow!’ So it was a good job I’d previously jotted down a few thoughts as I read and my judgement wouldn’t be skewed by what I’d heard.

While actually reading the book, I found it one of the most depressing I’d ever read. The story begins with hero Harry being mistreated in a harsh mental asylum. He’s moved from there to an unusual commune run by a doctor who is virtually experimenting on his patients. Of course, the reader wonders what has happened to Harry that he should end up in such a sorry state, so we then get his back story. He was a wealthy, rather innocent young man who did virtually nothing, married, lost his fortune, had an affair with a man which was discovered by his relatives and, as a result, emigrated to Canada as a homesteader.

It’s hard to know just what the book is about. The treatment of mental patients in the early twentieth century (ghastly)? The hardships of pioneer life in Canada (ghastly)? The difficulty of being a gay man in the early twentieth century (ghastly)? Harry is rather a non-character, a man to whom things happen, rather than someone making choices about his life. This does make you sympathetic towards him, especially when psychopathic (Gale’s word) Troels Munck arrives on the scene. The writing is beautiful, the descriptions of life in Canada (Winter is a real place) very evocative. There are characters to love. But how much bad luck can one man stand? Only at the very end is there a glimmer of hope which just about turns the book around. I’d previously enjoyed Notes from an Exhibition and Rough Music, so I won’t give up on Patrick Gale. It’s a good book, it just wasn’t for me.

A Place Called Winter is out this week and I read it courtesy of NetGalley.

Edit: I see this is to be the W H Smith Fiction Book of the Month.
Collapse