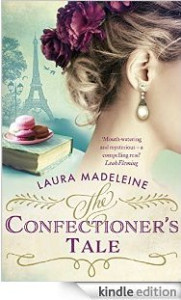 What a pretty cover, even if it does show a woman with half a head (why?). You have to read the book to know how inappropriate it is. More prettiness inside the book with pretty clothes and pretty cakes; but it’s really a detective story.

In the present day (1988) Petra is a research student at Cambridge, supposedly working on a thesis about the Belle Époque. She is constantly distracted from this by her personal problems and the quest she sets herself. Estranged from her father, she was close to ‘Grandpa Jim’, the late historian J G Stevenson. She attends a lecture by biographer Simon Hall which shows that he is going to dish up some dirt on her grandfather which she knows nothing about. Furious, she goes in search of more information but all she has to go on is an old photograph of her grandfather with two other people. It was hidden away at the bottom of a trunk, inside an envelope marked, 'forgive me'. Who is to forgive him and for what?

The 1988 chapters alternate throughout the book with another story, set in 1910. Gui du Frère, a poor young man from Bordeaux, travels excitedly to Paris, where he and a friend are to begin gruelling work on the railways. By a chance accident, he meets a beautiful young woman whom he later learns to be Jeanne Clermont, daughter of the owner of the famous Pâtisserie Clermont. The two are attracted immediately, although romance between a member of the bourgeoisie and a labourer is unthinkable. Eventually, Gui is given a job at the pâtisserie, which fascinates him and gives him the chance to see Jeanne. The scenes in the kitchens, where fabulously elaborate cakes are created, are the best in the book. Can the forbidden love between Gui and Jeanne ever come to anything? They are certainly star crossed lovers.

While the old story slowly unfolds, Petra is desperately trying to find out more about the secret, racing the unscrupulous Hall to vital clues, furious that her father has given Hall free access to all her grandfather’s papers. She learns that the Pâtisserie Clermont is central to the story and that her grandfather was in Paris in 1910. The hunt takes her to libraries and an art gallery, to Cornwall and Paris, until at last she discovers the uncomfortable truth, at the expense of her academic career.

I couldn’t believe in Petra as an academic; she seems rather slow on the uptake and far too disorganised. Nevertheless it is a story I wanted to finish and I enjoyed reading it. The book is just out, published by Random House. I read it courtesy of NetGalley.
Collapse