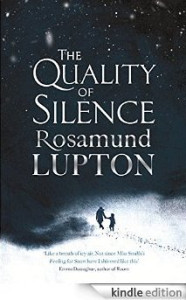 ‘In Alaska, you’re either warm or you’re dead’. This line from Northern Exposure (which I loved, anyone else remember it?) was in my head while I was reading this book. The main character is Ruby, who is deaf.
‘My name is a shape not a sound. I am a thumb and a finger, not a tongue and lips. I am 10 fingers raised old – I am a girl made of letters
R-u-b-y
And this is my voice.’

She tweets as @Words_No_Sounds and has followers from all over the world. On the internet she feels like anyone else but her mother, Yasmin, dislikes this ‘unreal’ world, and wants Ruby to speak ‘mouth sounds’. As the story begins, Yasmin and Ruby arrive in Alaska to meet Dad, a wildlife film maker, but at the airport they are met by a policewoman and told terrible news. The village of Anaktue, where Dad had been staying, has been completely destroyed by a terrible fire and Dad is among the dead. Yasmin won’t accept this (she has her own reasons for feeling angry with him and wanting to see him) and blags a lift north with a truck driver.

Now things get scary. The kindly Afghan driver falls ill and Yasmin steals the truck, determined to make her way to Anaktue, where she is sure her husband has managed to survive but needs to be rescued. She’s never driven anything larger than a car. There is no daylight, ever. A huge storm is forecast. Above all, she and Ruby must keep warm at any cost. As if this weren’t bad enough, they are being followed by a tanker whose driver obviously doesn’t want them to complete the journey. The terrifying drive, with those blue headlights always behind them, is like Spielberg's film Duel only in the dark and with the temperature 30 below.

This is the stuff of nightmares and you have to wonder (she wonders herself) how Yasmin could put a child of ten through such an ordeal. This is to underestimate Ruby: intelligent, brave, resourceful, trusting her mother, believing her father to be alive. She also keeps contact with the world through her laptop, which comes into its own. Her mother (who has a degree in astrophysics) tells her the earth is protected by the magnetosphere. To Ruby, the internet is a magnetosphere, covering the whole world.

This is a terrific book. The characters, the evocation of the strange, alien landscape and the terrible shock right at the end are all gripping. If I hadn’t had other preoccupations I think I might have finished it at a sitting. The Quality of Silence will be out on 2nd July and I read it courtesy of NetGalley.
Collapse