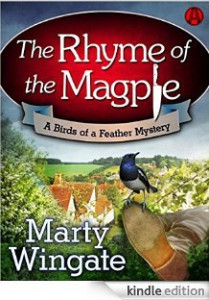 I enjoyed Marty Wingate’s first two Potting Shed Mysteries, featuring gardener Pru Parke. There’s another of those on the way. The Rhyme of the Magpie is the first book in a new series: ‘Birds of a Feather’. Again, Marty Wingate sets her story in England. It’s all pretty accurate to a pedantic British reviewer (pedantic? Moi?), though slightly disconcerting that it’s written in American English. It was published yesterday by Alibi and is only £1.79 for the Kindle.

The heroine is Julia, just starting a new job as a tourist information officer in a pretty English village in East Anglia. She’s changed careers after a falling-out with her charismatic father Rupert, a former academic turned famous face on television, with a much-admired programme about birds. Julia’s bitterness turns to alarm when her father disappears, leaving behind his mobile phone and having ‘borrowed’ her car rather than drive his own. Enter a new character, Michael, who has replaced Julia as Rupert’s assistant. The two discover the corpse of an unknown man, rather horribly murdered and from then on Julia is juggling work with detection and a possible love affair.

The villains here are the directors of a company wanting to set up a wind farm in a beautiful wild area which is the habitat of some rare bird species. Would they go so far as to murder anyone, or to put Rupert out of the way? Or does the explanation lie in old academic rivalries and marital jealousy? There are red herrings a-plenty before the truth is out, and danger for Julia. And can mysterious Michael really be trusted?

The magpies? They are always right!

The village setting, with its believable characters, is perfect for a cosy mystery and Marty Wingate packs a lot into a fairly short book. I read this enjoyable story courtesy of NetGalley.

PS, Ms Wingate. Don’t be too sorry that you can’t see the BBC’s popular Spring Watch in the States. It’s boring and much of it is rigged, IMO.
Collapse